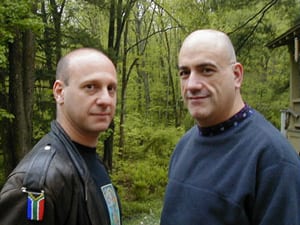 Two Men Talking is a dramatic dialogue between two schoolmates who started out as adversaries in apartheid South Africa and ended up as dearest friends at the height of the AIDS crisis in New York City. Audience members will be challenged to examine tough issues such as race, AIDS, human rights and sexual diversity as Paul and Murray tell the story of how these issues brought them together—but also wedged them apart. Their moving performance inspires audience members to reflect on the meaning of their own stories and to find empowerment by sharing those stories with others.

Like most little Jewish boys raised in South Africa during the early 1960s, Murray Nossel grew up privileged. His mother, busy with her career as a concert pianist, left part of Murray’s upbringing to the black nannies and servants his family employed. While he attended King David High School, class bullies mercilessly beat Murray for being a weak sissy boy. Another little Jewish boy growing up in South Africa amidst tennis courts and swimming pools, Paul Browde spent his afternoons around a gas stove eating staff meat and mealie pap with the servants. Also a student at King David High School, Paul lived in fear while watching class bullies beat up on a weak, sissy boy named Murray. Fast forward several years to the late 1980s, when Paul and Murray’s lives collided fortuitously in the theater district of New York City. To Murray’s surprise, while he had spent his years since high school vigilantly avoiding AIDS, Paul had spent them learning to live in spite of the disease. Two Men Talking takes the audience on a journey of epic proportions spanning over a century and circling the globe as Paul and Murray speak for themselves and for the many people who have lived and died without a voice.

If I Were a Cat