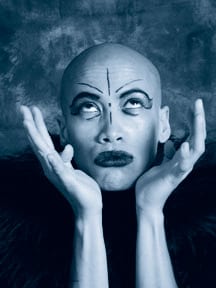 Cosmic Blood http://www.devilbunny.org.orgexplores the concept of mestizaje, the Spanish term used to describe the race mixture of Spanish and indigenous blood as a result of colonialism, from a perspective informed by history, contemporary culture and racial formation and creative, spiritual speculation about the future. Otalvaro-Hormillosa weaves video, sound and performance to illustrate the contradictory aspects of mestizaje in which the genocide and rape of one race led to the creation of a new race. By redefining mestizaje to incorporate mixed race and queer identities that take on countless forms as in the case of multicultural San Francisco, Otalvaro-Hormillosa paints a picture of the revolutionary potential for such subversive, yet fluid identities to dismantle the binaries created by colonial constructs relating to race and gender. Theories of contact between ancient civilizations and extraterrestrials influence Otalvaro’s artistic vision of a cosmic mestizaje. Sound Design by Melissa Dougherty. Cosponsored with QueLACo.

Gigi Otálvaro-Hormillosa, also known as the Devil Bunny in Bondage, is a SanFrancisco based interdisciplinary performance artist of Filipino and Colombian descent. She is originally from Miami, Florida and received her B.A. from Brown University. She has worked on various artistic collaborations under the mentorship and direction of performing artists such as Pearl Ubungen, Guillermo Gomez-Peña, Elia Arce and Afia Walking Tree. Her writing has been published by Social Justice Journal, shellac, artistmanifesto.com, Antithesis Journal: Sex 2000 and an anthology entitled Postcolonial and Queer Theories: Intersections and Essays. Awards include grants from the Franklin Furnace Fund for Performance Art (2000-2001), the San Francisco Art Commission Cultural Equity Grants Program and the Potrero Nuevo Fund Prize. Her video is currently online in the Popcorn Movies section of Planet Out’s website. 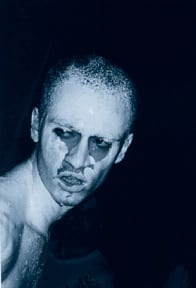 e-mael introduces a new performance practice. Performance Art Direct (PAD),an exploration in the dynamics of performance art as it attempts to merge with the larger world, begins with a year-long interactive experiment in the life of the artist and one performance uniform made of hemp canvas.

This effort to conflate performance art and life hopes to inspire a particular spontaneity in a variety of contexts, challenging how art is presently “made”, experienced and consumed. In doing so, PAD seeks to nvestigate/circulate emerging theories of conceptual realism in the following visceral and time-based manners: in shifting the location, intention, and physicality of canvas; in inserting/circulating art in culture with/in a physical and temporal immediacy; and, in re-imagining the role of performance art(ists) in intimate and professional settings. (Attending formal art “events” open to the public during this time will be especially inviting.)

E-mael has lived and worked in the Bay Area as a performance artist for over a decade plugged into an incredible network of alternative cultural generators. Nacido en el monte, he spent his formative years in la puente chased by specific gang members who resented their mutual attraction. Love is hard sometimes. He presently spends his time working on projects like Ultradown productions, Shellac and Performance Art Direct.