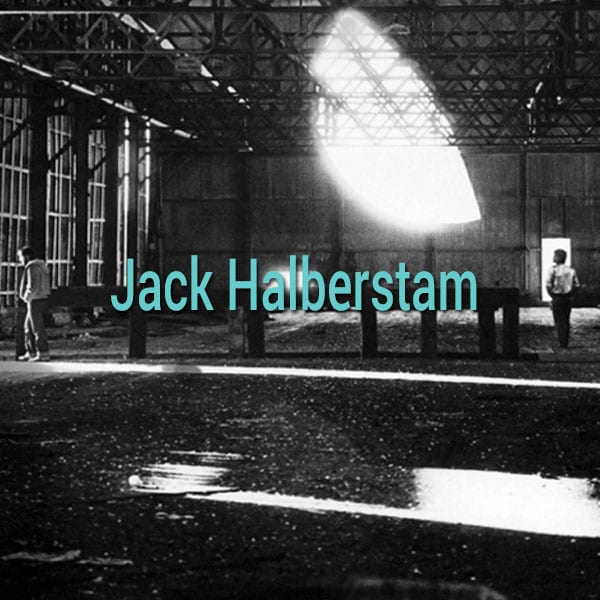 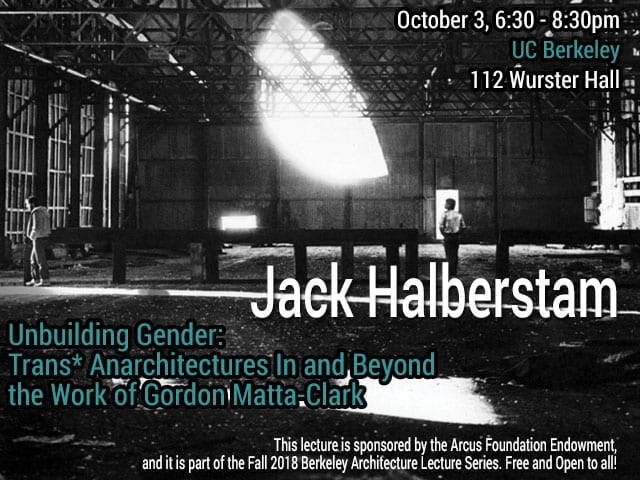 This lecture is sponsored by the Arcus Foundation Endowment, and it is part of the Fall 2018 Berkeley Architecture Lecture Series. Open to all!

In this talk, Jack Halberstam looks towards anarchitectural practices of unmaking as promulgated by the American artist Gordon Matta-Clark (1943–1978) and links the ideas of unbuilding and creative destruction that characterize his work to develop a queer concept of anarchitecture focused upon the trans* body . The concept of “anarchitecture” is attributed mainly to Matta-Clark, whose inventive site-specific cuts into abandoned buildings demonstrated an approach to the concept of home and to the market system of real estate that was anarchistic, creatively destructive, and full of queer promise. Of course, this is not to say that Matta-Clark nor any of the participants in the Anarchitecture group that he helped to found in downtown Manhattan in 1973 and ’74 would have understood their work in this sense. Rather, we might take up the challenge offered by Matta-Clark’s anarchitectural projects, in order to spin contemporary conversations about queer and trans* politics away from notions of respectability and inclusion and towards an anti-political orientation to unmaking a world within which queers and trans people, homeless people and immigrants are cast as problems for the neoliberal state.

Jack Halberstam is Professor of Gender Studies and English at Columbia University. Halberstam is the author of six books including: Skin Shows: Gothic Horror and the Technology of Monsters (Duke UP, 1995), Female Masculinity (Duke UP, 1998), In A Queer Time and Place (NYU Press, 2005), The Queer Art of Failure (Duke UP, 2011) and Gaga Feminism: Sex, Gender, and the End of Normal (Beacon Press, 2012) and, most recently, a short book titled Trans*: A Quick and Quirky Account of Gender Variance (University of California Press).  Halberstam is currently working on several projects including a book titled WILD THING: QUEER THEORY AFTER NATURE on queer anarchy, performance and protest culture the intersections between animality, the human and the environment. This talk is taken from an essay commissioned for Places Journal – the journal awarded Halberstam its Arcus/Places Prize this year for innovative public scholarship on the relationship between gender, sexuality and the built environment. 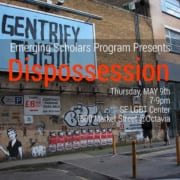 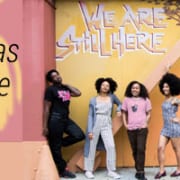