Tickets: $5, no one turned away for lack of funds 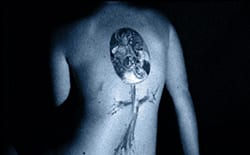 “Latinas Lesbianas” is a documentary that navigates the intersections between race/ethnicity and sexual identity. It explores how these categories are constructed, and what it means to be a lesbian while being Latina, and vice versa. It also explores what it means for a Latina to be inside the closet, a place that is both private and safe, where Latina lesbians/Latina dykes can struggle against a deeply conditioned, patriarchal, and homophobic society. This piece will show through a series of interviews, the opinions, experiences and stories of three Latinas – two Puerto Rican immigrants and one Cuban American – who are also activists in their communities.

M_nica Patricia Enr_quez, is a 22 year old, student at SFSU, artist and activist, of Colombian origin. She has collaborated with Carolyn Noir in the creation of The Fortuneteller a sculpture/altar addressing the issues of borders and borderlines. She has also performed theatre for social change, most recently Voces de Mujeres, reflecting on the response of the women’s movement against the U.S. intervention in Colombia. Most recently, she directed and created Latinas Lesbianas a documentary looking at the intersections of race and sexuality. For her, activism and art are inseparable and are both tools of resistance against racism, sexism, homophobia, transphobia, social inequity and other forms of oppression.

FOLLOW US!
Desire and CreationQueer Masala
Scroll to top