Learn To Be Latina
Enrique Urueta

A young Lebanese-American woman with pop star dreams is told by record executives that there’s no way in post-9/11 America that a Middle-Easterner could ever be a pop star–unless she pretends to be Latina.  Can she convince the world she’s Latina?  Can she convince herself that she’s straight?  A scathing dark comedy about media and identity brought to you by the playwright of last year’s staged reading The Danger of Bleeding Brown. 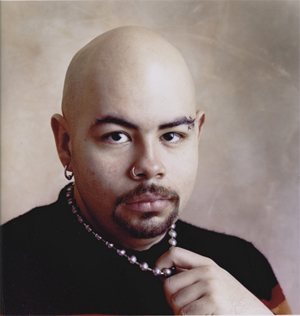 Enrique Urueta (Playwright) Colombian-American, by way of Virginia, Enrique grew up with a southern drawl and was educated at The College of William and Mary in Williamsburg where he studied theatre and geology. Impact Theatre in Berkeley, CA produced his play The Johnson Administration in August 2003. His play The Danger of Bleeding Brown had its first staged reading at the 2005 National Queer Arts Festival. His one-act play Learn To Be Latina received staged readings in the 2005 Bay Area Playwrights Festival and U-Mass Amherst and was produced by Golden Thread Productions in San Francisco. He is a recipient of a 2005 Theater Bay Area CASH Grant for the ongoing development of Learn To Be Latina. He is a proud member of NoPassport, a pan-American theatre coalition devoted the advocacy of Latino/a and hemispherically-minded work. He will begin the MFA playwriting program at Brown University in the fall of 2006.