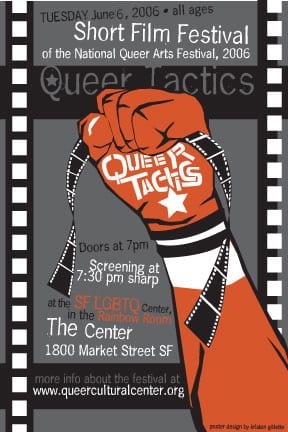 War!  Who needs it?  As Queers we can be more subversive and change the system.  Queer Tactics examines the visualization power of the queer community for social activism and protest through a series of short film works. Supporting the festival’s theme of “Hope and Healing in Times of War” we provide Queer Tactics.

No longer limited to the “Coming Out Story” queer filmmaking now includes all genres and narrative types, Queer Tactics, A Night of Queer Shorts at the National Queer Arts Festival demonstrates this still emerging art-form through films ranging from the comedic drag queen reality TV show, “Pretty Things” by Michael Lucid, to the youth-made, youth-inspired documentary, “In My Shoes: Stories of Youth with LGBT Parents” by award-winning filmmaker and BAVC employee, Jen Gilomen. Every festival needs a bit of spice, and Chris Vargas’  “The Drive” heats up the night by blending nature with passion and not in the ways you thought; the ever prolific, San Francisco queer filmmaker, Justin Kelly, jolts  us with a music video from San Francisco punk darlings, Veronica Lipgloss & the Evil Eyes’ “Strip Mall Glass”  and “Debris”, while Philipe Lonestar makes us squeal and squeam with  Portland Electronic HipHop dyke darlings’, Scream Club’s “Acnecore”. Old school Super 8 mm film was used to make the delightful puppet film: “Sigmund Freud: Professional Pyschoanalyst” by Kami Chilsolm & Jen Gilomen, all our favorite childhood homos are present,Ernie from Bert & Ernie, G.I. Joe and of course Barbie!

Holding true to our passion for politics and queerness and “Hope in the Times of War”, we have Sally Rubin’s “Body Politics” a beautiful portrait of a day when thousands got naked for peace near the Golden Gate Bridge.  Dara Sklar & Pam Dore, reveal just how passionate woman and girls can be when it’s that time of the month, in “Day One, A Period Piece”. Finally, no queer short festival would be complete without a voice to the powers of owning our bodies, and building, bodies that matter, in our quest for Queer Tactics: rounding out the night, in this regard, is Luke Woodward’s powerful piece about an amazing, upcoming Filipino FTM hip hop artist, Jacub Perez in “Rock the Boat”. 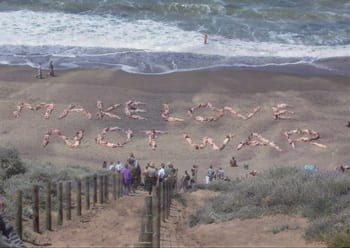 FOLLOW US!
Hope & Healing in Times of WarQWOCMAP 2006
Scroll to top