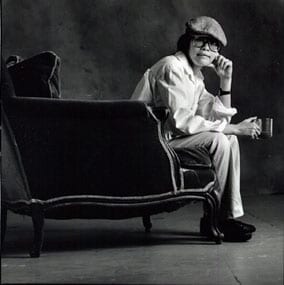 An Exhibition of Paintings by Lenore Chinn on May 8, 2001

San Francisco, CA… The 4th Annual United States of Asian America Festival will highlight a major exhibition of paintings by Lenore Chinn in the Bay Gallery at SomArts (South of Market Cultural Center), 934 Brannan Street off 8th in San Francisco from May 8 – June 10, 2001, with an artist’s reception on Thursday, May 10th from 5:30pm – 7:30pm. The exhibition is a collaborative program sponsored by three of the City’s cultural centers: SomArts, the Asian/Pacific Islander Cultural Center and the Queer Cultural Center. It will also be a major visual arts component of the 4th Annual National Queer Arts Festival.

The exhibition’s approximately 20 pieces will offer a collective portrait of the Queer community as it has developed over the past thirty years. The May exhibition will include Chinn’s newest work — a portrait of the late Bernice Bing, who was a noted Bay Area pioneer artist of the Beat era, a founder of SomArts and its first Executive Director. Like most of Chinn’s other sitters, Bing was a local Queer artist and activist.

Lenore Chinn began painting when she was growing up in San Francisco’s Richmond District and began focusing on portraiture as her primary expressive medium during the sixties. She held her first solo San Francisco exhibition at the famed Lucien Labaudt Art Gallery in 1980 and her first group show was at the San Francisco Art Commission’s Gallery that same year. Several of Chinn’s portraits were included in group exhibitions of the late eighties AIDS era.

In 1990 Chinn co-curated her first Lesbian/gay artists exhibition at San Francisco’s City Hall. In 1998 she co-curated FACE: Queer Expression through Self-Portraiture and in 1999, she co-curated They Hold Up Half the Sky, which included a Bernice Bing retrospective.

Chinn uses acrylics to explore the super-realistic depiction of a wide spectrum of people of color, lesbians and same sex couples. Employing a coded iconography rooted in a lesbian/gay cultural perspective, these portraits fuse an Asian aesthetic of sparseness and clarity with visual narratives that counteract the “magic-truth rituals” of racial and gender construction.