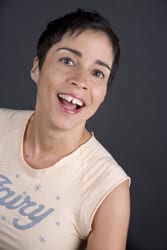 Pride continues with queer and ballsy comedy from Marga Gomez (GLAAD Award Winner, seen on LOGO’s Wisecrack and Laughing Matters) and her special guests Kenny Yun (winner of Russian River Comedy Competition) and Ronn Vigh (from NBC’s Last Comic Standing.) A small portion of proceeds will be used to imprison Paris Hilton in a lesbian bar without her palm pilot.

Marga & The Boys is co-presented by QueLACo

Marga Gomez
Marga Gomez is recognized as a national lesbian treasure for her fifteen years as an openly gay, fierce, funny, and foxy comedian. She has been featured on HBO’s Comic Relief and Comedy Central’s Out There. With devastating one-liners, fabulous characterizations, political satire, and a pinch of smut, Marga aims her comedy at everyone regardless of ethnicity, sexual orientation, or hairstyle.

Where My Girls At

FOLLOW US!
Translations Dance ABOUT NQAF 2007
Scroll to top