The monthly Radar Reading Series kicks off another National Queer Arts Festival spectacular. Haitian-American performance poet Lenelle Moise, Cherry Muhanji, author of the classic novel Her, comic artist and L Word staff writer Ariel Schrag and the critically acclaimed Alison Bechdel, author of the illustrated memoir Fun Home and the much-beloved comic Dykes to Watch Out For, present their work and take questions from the audience. Hosted by Michelle Tea, who will have home-made cookies on hand.

Ariel Schrag
Ariel Schrag is the author of the comic books Awkward, Definition, Potential and Likewise, which chronicle her four years at Berkeley High School. She wrote the screen adaptation for Potential which is being made into a feature film by Killer Films. She is the editor and a contributor to Stuck in the Middle – 17 Comics from an Unpleasant Age, a comics anthology about middle school published this May. She is also a writer for the Showtime series, The L Word.

Alison Bechdel
Alison Bechdel has been creating the comic strip Dykes To Watch Out For since 1983. Her graphic memoir ³Fun Home: A Family Tragicomic² was a finalist for a 2006 National Book Critics Circle Award.

Cherry Muhanji
Cherry Muhanji has studied and presented her work internationally. She received her Ph.D. in English, anthropology, and African American World Studies from the University of Iowa. Winner of the Ferro-Grumly Award for Lesbian Fiction and the Lambda Book Award for Her, Muhanji was also awarded the Before Columbus Foundation American Book Award for Tight Spaces (1987), which she co-edited with Kesho Scott and Egyirba High. 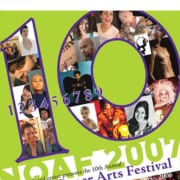 HERE’S WHERE I STAND

Why are Faggots so Afraid of Faggots (The Sequel)

For Lack of a Better Word