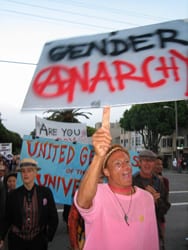 The largest transgender celebration in history!

The Fourth Annual Trans March will take place Friday June 22nd in Dolores Park, San Francisco. Live bands, transgender and gender-variant activists, political speakers, drag kings, and musicians will perform from 3:30 pm till 7 pm, and the March itself will begin at 7 pm.  Performances in Dolores Park will continue after the March until 9 pm.

The Trans March is a grassroots, community-building political event, welcoming transgender, genderqueer, intersex, and all genders of people, as well as allies.  It is a demonstration of trans visibility, celebrating the growth of a gender movement.  The purpose of this event is to:

1. Demonstrate that the violence and discrimination directed against the transgender community will not be tolerated.

2.  Celebrate the struggles of the trans community for respect, acceptance, and civil rights.

3.  Build a supportive, unified trans community by bringing together diverse genders, ages, ethnic backgrounds along with our allies.

Primary sponsors, organizers and supporters of this event include:

FOLLOW US!
Dyke March 2007HERE’S WHERE I STAND
Scroll to top