Join us for the opening night gala event of the National Queer Arts Festival 2001! Alice Walker, Dorothy Allison, and Jewelle Gomez will each be reading from published and soon-to-be published works. This evening is a benefit for the Qcc Lesbian Writer’s Fund. 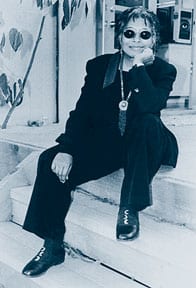 Alice Walker
Alice Walker was born in the beautiful Georgia countryside February 9, 1944. She attended local public schools and graduated from high school as valedictorian and, in her senior year, been voted most popular student in the school and crowned queen. She graduated from Sarah Lawrence College in Bronxville, New York in 1966. While still a student, she wrote her first book of poetry, Once, published in 1968. By the time Once was published she was living in Mississippi, working in the Civil Rights Movement and completing her first novel, The Third Life of Grange Copeland. Five novels followed: Meridian (a woman insists that the connection to Spirit be kept alive during any political movement); The Color Purple (which won the Pulitzer Prize and an American Book Award); The Temple of My Familiar (“a romance of the past 500,000 years”); Possessing the Secret of Joy (a family’s effort to heal a wife/mother/sister who has been genitally mutilated); and By the Light of My Father’s Smile (a contemplation of an indigenous view of the spiritual power of sex, and the healing of hurts between sisters, and between fathers and daughters, that might be possible only in the “afterlife”).

Walker’s three short story collections are: In Love & Trouble, Stories of Black Women; You Can’t Keep a Good Woman Down; and, most recently, The Way Forward Is with a Broken Heart. Her three collections of essays are: In Search of Our Mothers’ Gardens; Living By the Word; and, Anything We Love Can Be Saved, Warrior Marks: Female Genital Mutilation and the Sexual Blinding of Women. 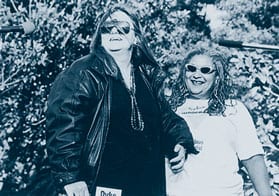 Dorothy Allison
Dorothy Allison is the author of Bastard Out of Carolina, a finalist for the 1992 National Book Award; Cavedweller (Dutton, 1998), a national bestseller and a New York Times Notable Book of the Year; and the memoir Two or Three Things I know for Sure (Dutton, 1995). Her poetry The Women Who Hate Me (1990), short fiction Trash, (1989), and essays Skin: Talking About Sex, Class, and Literature (1995) were published in small press editions by Long Haul and Firebrand Books. Allison’s first novel, Bastard Out of Carolina, was made into a highly acclaimed film and was directed by Angelica Huston. Two or Three Things I know for Sure was translated into a short documentary that took prizes at the Aspen and Toronto film festivals, and was an Emmy-nominated feature on PBS’s POV. Cavedweller is being prepared for the stage by playwright Kate Ryan, and Showtime recently optioned the novel for a two-hour prime-time movie. More Web info: www.dorothyallison.com

Jewelle Gomez
Jewelle Gomez is a writer and an activist, as well as the author of the double Lambda Award-winning novel, The Gilda Stories (Firebrand Books). Her adaptation of the book for the stage, Bones & Ash: A Gilda Story, was performed by the Urban Bush Women company in 13 U.S. cities. Gomez is the recipient of a National Endowment for the Arts literature fellowship and two California Arts Council fellowships. Her fiction, essays, criticism, and poetry have appeared in numerous periodicals. Her publications include three collections of poetry: the self-published The Lipstick Papers (1980) and Flamingoes and Bears (1986), and, most recently, Oral Tradition (Firebrand Books, 1995). She also selected the fiction for Best Lesbian Erotica 1997 (Cleis Press). Her new projects include a comic novel about black activists of the 1960s as they face middle age. She is also working with actor Harry Waters, Jr. and director Arturo Catricala on a collaborative performance piece based on the life of author James Baldwin. More Web info: www.jewellegomez.com