Let your queer light shine this Pride season at Queer Open Mic. Proto-feminist and genderqueer in scope, the night aims to combine the raunchy enthusiasm of the Hole in the Wall, the warmth and community of Ashkenaz, the unapologetic queer of the Bearded Lady, the radical politics of Café Macondo and the sweet rhythms of El Rio to create a space for spoken word, poetry and performance that is multi cultural, multi gendered, completely inclusive and dynamic. Art is revolution, bring your spirit, your words, and your fierce to this rowdy and rollicking performance experience.

QUEER OPEN MIC happens on the 2nd and 4th Fridays of every month at the THREE DOLLAR BILL CAFE on the first floor of the SF LGBT COMMUNITY CENTER at 1800 Market @ Octavia in SF and is hosted by Cindy M. Emch.

Open Mic sign up begins at 7:30, readings start at 8pm. Anyone with special needs should contact Cindy the night of the event for any specific accommodations. $1-5 donations benefit the performers and The Center (www.sfcenter.org) in an effort to encourage more queer art in our community. No one turned away for lack of funds. (Open mic readers get 5 minutes, or one piece, whichever comes first)

Host – Cindy M. Emch
Cindy is a working writer who has had her poetry published in Lodestar Quarterly and has self published the chapbooks “Autumn Leaves Don’t Always Turn” and “Notes From A Big Tough Journal.” Her film reviews and pop culture writings have been published in the SF Bay Guardian, RedEye Magazine, American Sexuality Magazine, Taste of Latex, Women In Power, KPPT as well as in the pages of many LGBT film festival catalogs. Emch is the founder, host and curator of Queer Open Mic at the Three Dollar Bill Cafe, the newest home for rowdy revolutionary performance poetry in San Francisco. In her spare time she has managed to climb over 200 trees, explore 45 out of the 50 states, had nine piercings and four tattoos, had eight childhood scars, two of which should’ve had stitches and didn’t, and drinks WAY too much coffee. 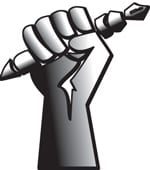 Queer Open Mic is a rowdy good time all year long, but we’re especially happy to open our doors to the sharing of art and connecting that happens in SF every June.  An open mic allows everyone a chance to get up there and do their thing in front of a whole new audience. So come on over; you are family here.

In honor of the theme of healing, Queer Open Mic is highlighting performers and work that focuses on surviving, healing and recovering. In sharing our words, songs and experiences, our art becomes the revolution. 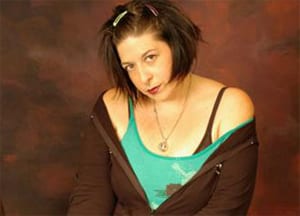 Like a Russ Meyer sex kitten with a punk rock edge, emchy is a poet, performer, curator, and all around community-building hell raiser. She has published five chapbooks, writes for the Hillgirlz.com blog, has featured at K’vetsch, Varnish and other neato places and is very proud to have founded the Queer Open Mic in August 2004. For more information check out www.geocities.com/indigo_cin 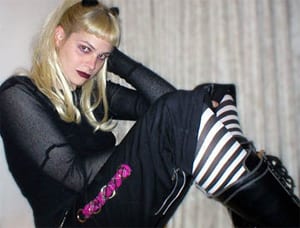 Sherilyn Connelly is a San Francisco-based writer. She’s featured at shows throughout California such as K’vetch, The Unhappy Hour, Poetry Mission, Siren, Ladyfest Bay Area, the TGSF Cotillion, and The Vagina Monologues. Her writing can be found on paper in I Do / I Don’t: Queers on Marriage by Suspect Thoughts Press, Jennifer Blowdryer’s Good Advice for Young Trendy People of All Ages anthology, Girlfriends, Morbid Curiosity, and her own self-published chapbooks. Her stage work includes acting in productions of Night of the Living Dead, The Hitch-hiker’s Guide to the Galaxy and Zippy the Pinhead (as Karen Carpenter), as  well as adapting and directing a live-action Twilight Zone episode. For more information check out www.sfgoth.com/~sherilyn 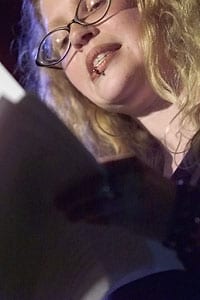 Meliza  Bañales is the author of Girl With the Glass Throat, Scratching a Surface, and Say It With Your Whole Mouth (nominated for a Poetry Center Book Award in 2004).  Her work has been featured in the anthologies Revolutionary Voices (ed., by Ami Sonny) and Without a Net: The Female Experience of Growing-Up Working-Class (ed., by Michelle Tea), both of which were LAMBDA nominees, as well as in Transfer, Lodestar Quarterly, and Laundry Pen.  She was the 2002 Oakland Grand Slam Champ and the first Latina on the west coast to win a poetry slam championship and was the 2002 winner of the People Before Profits Poetry Prize.  She has fiction in the upcoming anthology Baby, Remember My Name: New Queer Girl Writing (ed., by Michelle Tea), four entries in the first ever Encyclopedia of Activism and Social Justice, a short film, Do the Math, with Mary Guzmán in Frameline 2006 (which was also the winner of a 2006 Frameline Completion Grant), and a second book of poems, 51 Poems About Nothing At All, out in June from Monkey Press.  She writes smutty reviews and short articles highlighting women of color for Girlfriends and On Our Backs magazines and currently lives in Savannah, GA.

Raised in Milwaukee, Joel A. Brown has been writing since the age of 7, but did not consider it a vocation until the age of 17. Joel approaches his craft from a spiritual perspective instead of as an academic discipline. In a word, he describes his poetry as “authentic.”

His poetry is a unique blend of urbanism, sensuality, and spirituality, which speaks to life and its varied nuances. “I don’t know what I don’t feel,” says Joel, “so my poetry is strictly my truth being revealed.”

He has 300+ poems to date, and spends his time traveling and performing at poetry events, schools, civic celebrations, and spiritual gatherings, both locally and nationally.  In 2003, Joel launched a community arts project called “Souletry”: an enterprise which provides poetry workshops and offers young people-particularly African-American, LGBT and at-risk youth-the opportunity to express themselves in creative space

He has been published in various urban magazines and literary publications, and usually performs under his stage name, “Atypcl,” which is largely  indicative of his multi-cultural identity. In June 2005, he released his first CD of poetry, Lucid Intervals.