From Langston’s dreams deferred, to La Bentley’s gender bending Blues, we celebrate traditions of dissent and Queer Black Aesthetics. Join us as we reclaim history and the urgency of our voices.

Formed in late 2008, Queer Rebels showcases queer artists of color, connects generations, and honors our histories with art for the future.

“An evocative panorama of exceptional talent” – SF Examiner
“…speaks quietly to our hearts and sets fire to our minds.” – Autostraddle

For the most up-to-date info, please see: www.queerrebels.com and www.facebook.com/QRProductions 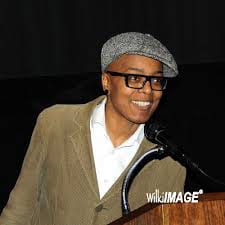 Campbell X is a pioneer filmmaker, curator and artist whose work has been seen all over the world including in film festivals such as the MIX Experimental Queer Film Festival in New York; Frameline, the London Lesbian and Gay Film Festival and others. 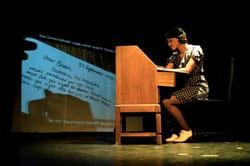 Carrie Leilam Love has an MFA in fiction from San Francisco State University and has been published by Diner Journal and Intersection for the Arts. She blogs about fashion and culture at Ironing Board Collective, and works as a teaching artist for WritersCorps, a program of the San Francisco Arts Commission. In her free time, she plays roller derby with the Bay Area Derby Girls and curates her soon-to-be renowned 80s boot collection. 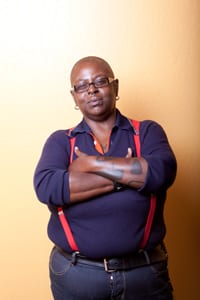 After living in Berlin, Germany for 9 years, Crystal Mason returned to San Francisco to work for 11/2 years as the Executive Director at the Jon Sims Center for the Arts. In 2008 she co-produced and did the video for the multimedia theater piece Hey, Sailor.  Her last project in Berlin was a two-year long European Union funded film project dealing with multi-dimensional discrimination faced by lesbians of color and immigrant lesbians in Berlin. From 1997-2001, Crystal co-owned and operated Schoko Café, a women’s art and culture center. In San Francisco from 1989-1995 Crystal was an AIDS activist and organizer working with ACT UP and the San Francisco AIDS Foundation in the Women’s and Children’s Program. From 1993-1995 she was the co-founder and co-artistic director of Luna Sea Women’s Performance Space.  Crystal was also a regular behind the scenes and in front of the camera on Electric City Queer TV for several years. For the last 3 years Crystal has managed the art gallery at Black and Blue Tattoo.

Enajite Pela – is a Queer, Nigerian and Black, disabled, musician, filmmaker, and storyteller. While primarily a musician, she navigates art mediums to tell stories that break down systems oppression and show the beauty of black bodies, disabled bodies, and queer identities. 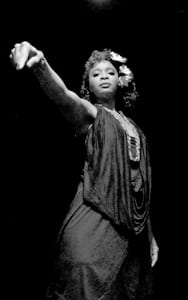 Indira Allegra is a Lambda Literary Fellow, Banff Center writer and interdisciplinary artist poeting through performance, video and handwoven textiles. She has contributed work to the Yellow Medicine Review: A Journal of Indigenous Literature, Art and Thought, and Sovereign Erotics: A Collection of Two Spirit Literature, Konch Magazine and Make/Shift Magazine among others. Indira has performed and screened work with Queer Rebel Productions, Mangoes with Chili, The Yellow House Project and Peacock Rebellion. Her experimental videopoems Weep Willow: The Blues for Lady Day and Blue Covers have screened both nationally and internationally. In the Bay Area, her textile works have shown at the Alter Space and College Avenue Galleries. In 2012 she was the curator and creative director for Artists Against Rape and was a member of the artistic core of Sins Invalid in 2008. A VONA alum, Indira has taught digital storytelling and poetry workshops at Intersection for the Arts, Geneva Car Barn and Powerhouse and proj-ectPRO:JECT. She is currently completing her first collection of poems entitled Indigo Season. indiraallegra.com 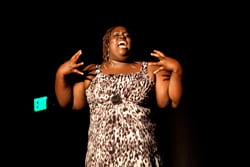 Jezebel Delilah X is a queer, Black, femme performance artist, writer, filmmaker, and teacher. She is co-host of the East Bay Open Mic, Culture Fuck, a member of the story-telling performance troupe, Griot Noir, and one of the founding members of Deviant Type Press. She has been published in The Womynist, is a featured writer for Black Girl Dangerous, and has written/directed/produced two films that have screened in the Queer Women Of Color Film Festival. She uses a combination of performative memoir, theatrical poetry, and feminist storytelling to combat capitalism and patriarchy and advance her politix of radical love, socioeconomic justice, anti-racism, and community empowerment. She holds a Masters Degree in Creative Writing from Mills College, where she focused on Young Adult Fiction and Memoir Writing. 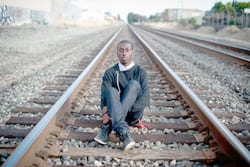 Joshua Merchant is a writer, activist, and native of East Oakland. Combining a masterful eye for detail, startling vulnerability, and unflinching courage, Joshua explores queer issues, black identity, and the complexities of their intersection. In 2011, he won the title of Youth Speaks Champion and represented the Bay Area at Brave New Voices. Later that year, he became the Berkeley Slam’s youngest Individual World Poetry Slam (IWPS) representative. He continues to work with Youth Speaks, as well as “I Go,” a non-profit youth poetry organization, and has performed at the Davis Symphony Hall, the Warfield, and venues across the country. Joshua is one of the great young voices of slam. www.joshuamerchant.tumblr.com 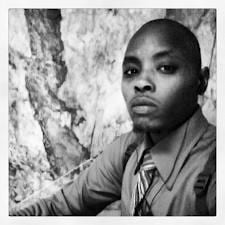 Dr. Kortney Ryan Ziegler is an award-winning filmmaker and scholar. Their work has screened across the United States and in England, Spain, Switzerland, Australia, Israel, and The Netherlands. They are also completing a dissertation in African American Studies from Northwestern University with a proposed graduation date of December 2010. The film hokum: draws on ideas of sex, gender, and black masculinity and a soundtrack by queer Harlem artists such as Gladys Bentley and Ma Rainey, to ask of its audience: what does it mean to take pleasure when viewing the queer black female body? 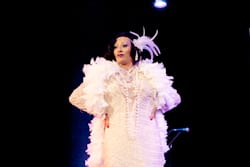 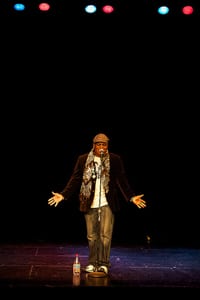 Lambert Moss – hails from New York, New York where he drew inspiration from his time in musical theater and from some of the fiercest drag queens ever. He is now happy to call San Francisco his adopted home. In San Francisco he has performed at CounterPULSE in “Precious Drop” with the Jaara Dance Project and sung back up at The Rrazz Room for a wide range of acts including Justin Bond. You can see Lambert on select friday nights at “SOME THING” belting it out and making his drag mom David GLAMAMORE proud. 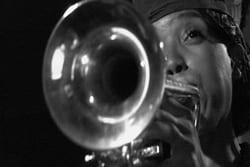 Meja Tyehimba began her theatrical career at the famed New LaFayette Theatre in Harlem and her experience spans from playwright to producer to stagehand. She has taught theatre arts to youth and has been an artist-in-residence from Virginia to New Mexico to the Berkeley Rep School of Theatre. She screened two of her films at the 7th annual Queer Women of Color Film Festival. 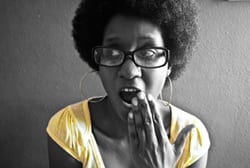 Mia McKenzie is an award-winning writer and the creator of Black Girl Dangerous, a multi-faceted online forum for the literary and artistic expression of queer and trans* people of color. She’s a smart, scrappy Philadelphian with a deep love of fake fur collars and people of color. She’s a black feminist and a freaking queer. She studied writing at the University of Pittsburgh. She is the winner of the Astraea Foundation’s Writers Fund Award (’09) and the Leeway Foundation’s Transformation Award (’12). You can find her short stories in The Kenyon Review and make/shift. Her debut novel, The Summer We Got Free, is a finalist for the 2013 Lambda Literary Award and has been described by author and critic Jewelle Gomez as “a brilliant tapestry filled with exuberance and anxiety.” Her work has been recommended by The Root, Colorlines, Feministing, Angry Asian Man, and Crunk Feminist Collective, among others.  www.blackgirldangerous.tumblr.com/ 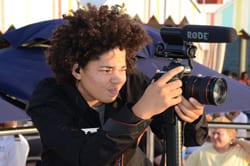 oriana bolden enjoys most anything as long as there is a working camera in her hand. She has had the great opportunity to shoot in the jungles of Panama, the parks of Cuba, the townships of Johannesburg, South Africa, and during numerous urban uprisings in Oakland, CA. From shooting live television broadcasts for Free Speech TV to teaching workshops in communities from Duck Hill, MS to Honolulu, HI, she has proudly captured and/or facilitated moving images for social and economic change. Until such time as there is an end to the oppression of all peoples of the world, the vast majority of her work centers on people trying to get free.

As an emerging media maker, bolden was nominated for a Rockefeller Media Arts Fellowship. Most recently bolden received a certificate from UCLA’s Media Psychology and Social Change Program. More importantly, bolden is a justice-seeking hustler with an artistic flare, much like her tough-as-nails momma, drank-slangin’ daddy, and smooth-talkin’ grandaddy before her. Swing by www.projectprojecting.com to see what she is up to at any given moment.”

Star Amerasu This young, intelligent woman, started out telling stories, learning to read and write at just two years old. This child began her performing life, reading books aloud. Star began singing as a child, in primary school choir. She went to a Fine Arts Academy for her high school days, was able to skip some grades and graduate at seventeen. Star attended Cornish College of the Arts on a Scholarship. She has performed many different roles, crossing gender boundaries. 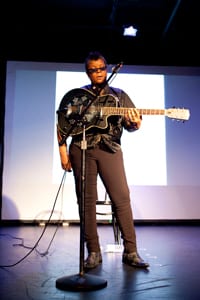 TuffNStuff: Drag King of the Blues is the stage persona of singer/songwriter Kali “KB” Boyce. KB is a Two-Spirit musician whose adventures have brought hir from teenage punk band appearances at CBGBs in NY, to B-grade horror movies in LA, and on to solo performance in queer San Francisco.  As TuffNStuff, s/he composes and performs music that pays homage to African-American and Indigenous legacies of resistance through art. S/he conjures the spirit of cross-dressing Blues performers – reflecting the history, creativity, and aesthetics of the ancestors. KB is dedicated to bringing the legacy of gender bending Blues to our community. KB is the Co-Founder and Co-Director of Queer Rebel Productions. www.kingtuffnstuff.com 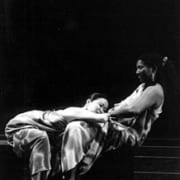 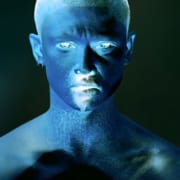