Migrating Sexuality: Unspoken Stories of Land, Body and Sex is a mixed media visual art exhibition and literary performance that centers the marginalized voices of Queer (Im)migrants of color in the U.S.  These stories, told through performance and visual media, hope to capture the diverse migration narratives embodied by Queer People of Color.  On opening night, poets and their testimonios take center stage. Performers are surrounded by dynamic murals, paintings, drawings and installations which center the body as they speak to the ways we navigate and transgress borders in our daily lives.  It’s an event you don’t want to miss! 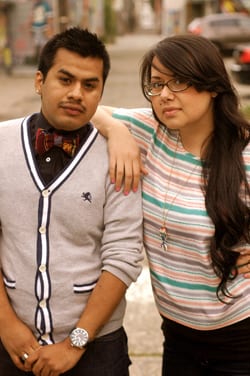 Yosimar Reyes is a Two-Spirit Poet/Activist based out of San Jose, CA.  Yosimar has performed his poetry from the Bay Area to New York City.  His style has been described as “a brave and vulnerable voice that shines light on the issues affecting Queer Immigrant Youth and the many disenfranchised communities in the U.S and throughout the world.”  He holds the title for the 2005 as well as the 2006 South Bay teen Grand SLAM Champion, has been featured in the Documentary 2nd Verse: the Rebirth of Poetry. (2ndversefilm.com) and published in Mariposas: A Modern Anthology of Queer Latino Poetry (Floricanto Press). Yosimar is currently touring his self-published book, For Colored Boys Who Speak Softly.

Graciela Arguelles is a queer Chicana poet and artist from North Hollywood, CA. She has curated numerous cultural, political and educational artistic events.  Some of these events include: An Evening with Chicana Activist Olga Talamante, a university lecture and reception; A Night of QWOC Films with Womyn Image Makers, a screening of short films; and Reunión de Art, a gallery exhibition that included art created by youth in the community, silent auction, spoken word artists, and live art made by community in attendance.  As part of her graduate work at San Francisco State University in the College of Ethnic Studies, she is researching the relationship between art and activism, looking specifically at the ways traditional Chicana/o Political Poster Art Movement elements are currently applied to advance a feminist politic.

Spouses for Life – The LGBT Center