This Was Queerlesque!  is an intergenerational burlesque & cabaret show that explores the queer histories of burlesque/exotic dance. Featuring performances from burlesque legends like Holiday O’Hara and Isis Starr as well as new work from neo-burlesque performers such as The Lady Ms. Vagina Jenkins, Essence Revealed, Rivolta Sata and Kitty Von Quim that pays tribute to their queer performer influences.

KITTY VON QUIM–Straight out of a John Waters’ Movie, she’s a rebel. KITTY VON QUIM is no fat kid in the corner: the sassy and sumptuous burlesque cutie has shaken and shimmied center stage all over the Bay Area over the last five years as a part of Rubenesque Burlesque. She has performed coast to coast always representing triumph, beauty and pure joy.   facebook.com/kittyvonquim  Photo: Tristan Crane Photography

RIVOLTA SATA Rivolta Sata, the production manager of Cirque Manikk, is a mulitdisciplinary artist with experience in the circus, visual, theatre arts and more. Rivolta uses history and hopes for the future to guide movement and sound through their talents to tell stories, to teach and to enlighten as well as to meditate.  facebook.com/cirquemanikk Photo: Courtesy soul-imagery.com 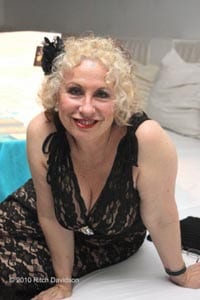 ISIS STARR-–  Isis began studying Ballet at 7 and at the tender age of 12 decided to be a Burlesque Queen after seeing the movie Gypsy.  She perfected her bumps and grinds and took them to Ballet class where they were not appreciated.  Nine years later she was working at the Condor Club in North Beach, San Francisco.  Realizing she was born too late to be a true Burlesque Queen, she started stripping from a Burlesque perspective.  Since then she has been around the workd twice on a g-string and is now a Living legend and the Goddess of Burlesque.

Isis used to perform under the name Monique Starr.  It’s a long story.

You can contact her if you want to hear it:  burlesquegoddess@gmail.com

On stage she is the personification of olde world elegance.  She has performed on every continent of the world, excluding the North and South Poles, because she doesn’t want to freeze her tits off.

Isis has performed at the Crazy Horse in Paris, Beirut and Australia.  She also did 3 months at the Moulin Rouge in Paris.  She has worked the Windmill Theater in London and Paul Raymond Revue Bar, as well as the Olde Latin Quarter.  Isis has also performed in Japan, South Korea, Singapore, Malaysia, Thailand, Spain, Portugal, Morocco in the Casbah, Russia, Denmark, Sweden, Norway, Germany, France, Hawaii, Alaska, Las Vegas, Philadelphia, Boston and even Guam.

She redefines the Art of Burlesque, with Style and Grace, Form and Face.  Her performances are an outpouring of feminine power and sensuality.  Burlesque is the Art and “I Am both the Artiste’ and the Dance.”  Isis is an accomplished Tantrika and Sacred Dancer.  She has studied the Temple Arts for many years, is a Priestess of Isis and a published poet. www.IsisStarr.com. Photo: Ritch Davidson

THE LADY MS. VAGINA JENKINS—Is a neo-burlesque performer of 10+ yrs and the curator and producer of This Was Queerlesque.  Ms. Jenkins can be found on the web at VaginaJenkins.com. Image: Shilo McCabe

HOLIDAY O’HARA – This golden living legend is a Boston girl gone bad! A fan of burlesque from an early age, Miss O’Hara began exploring that interest in earnest when she turned 18. The year was 1968 and Holiday truly began

to emerge when she started go-go dancing on Broadway in San Francisco in October 1968, and by 1970 she was learning to strip at The Chez Paree on Mason St. Thanks to Tori Lynn, Ellion Ness, Baby Doll,

and Joni Love, she learned to walk, strut, spin, twirl, and master the fine art of how to be a lady and a strumpet at the same time!

In 1972 life on the road called her name and she began dancing at The New Action Follies and The Turk St Follies. Soon she became infamous nation-wide as Holiday O’Hara: “The Lady Who Loves to Love

You.” Also known as “The Heart of San Francisco,” Miss O’Hara toured from coast to coast and half-way around the world, from Georgia to Guam. But she knew she would always return to where her heart was happiest –San Francisco!

She transitioned from international burlesque star to stage manager with a stint as a theatre and technical manager at the Sutter Theatre until 1983. 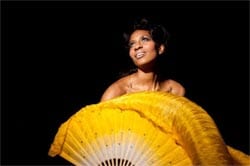 ESSENCE REVEALED
This Boston beauty transplanted herself to the Big Apple because she had a secret. She knew the essence of woman and she needed the best stages to show the world just how strong, sensuous, beautiful and bold that essence is! And the performer known as Essence Revealed was born!!

Since storming New York she has helped motivate women to dare to be their most beautiful, most fit, and most empowered selves both on stage and off! Hire this cinnamon starlet and discover the best of woman, the essence of woman! 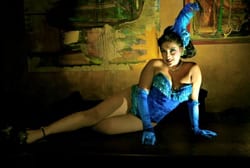 Ms. Cherry Galette (the girl who puts the cha cha in muchacha!) serves up a nice thick slice of tasty, glam, raw, gritty, old world Latin cabaret and golden era belly dance meets Oakland streets, sweaty sheets and jungle beats to create saucy, fun and soulful cabaret and burlesque for audiences in the Bay Area and beyond. Cherry creates movement narratives exploring race, power, empire, and bodies in diaspora, and presents genre pushing work based in sultry, sacred, and profane fusions of traditional dance forms and song with queer story, burlesque, cirque, and cabaret. She has captivated, delighted, roused and stunned audiences on stages across the Americas from La Habana to Montreal and many, many points between.

Over the past 7 years, she has produced and curated more than 70 unique productions for audiences across North America as both solo producer, and as Co-Director of Mangos With Chili, North America’s only traveling queer people of color cabaret. She is proud to have been an Oakland Tribune covergirl, and has also been featured in Oakland Local, Bitch, Make/Shift, San Francisco Bay Guardian, the SF Chronicle, and other independent media across the US. Cherry was raised by a family of legendary music makers and innovators who centered song and dance as tools for transmitting hope, history, revolt, and the ability transform and lift heavy hearts. She is proud to continue her family’s work by giving audiences quality dance and burlesque performance based in roots of resistance, tradition, and inherited movement and musical legacy.”