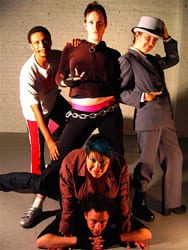 The LGBT Community Center opens their Launch Pad Performance Series with Safer to Name.
Male.  Female. Trans.  Genderqueer.  Gay.  Straight. Bi.  Butch. Femme. Top.  Bottom. Where do you fit in? Or not.  In “Safer to Name”, a new original work, Identified Queer Objects takes a performative look at gender dynamics in the queer community, challenging our assumptions about what it means to be male, female, or somewhere in between.

“Safer to Name” identifies, deconstructs, and re-visions how we simultaneously conform to and confront societal gender constructs.  How do we articulate our gender identity in the spaces between a community that celebrates fluidity and a society that doesn’t?  What happens when the people that share our struggles for acceptance adhere to roles we work to transgress?  “Safer to Name” integrates movement, poetry, and overlapping narratives to reflect the multiplicities and nuances of identity.

Maya Orli Cohen
Maya Orli Cohen is an artist: filmmaker, performer, poet, and cultural activist. She earned her BFA at Tisch School of the Arts in Film at NYU and her MA with a focus on queer activist interdisciplinary Performance at the Experimental Performance Institute at New College of California.

Alexis Dinno
Alexis Dinno is a capoeirista, writer, and folk dancer.  She has engaged in performative queer gender in venues ranging from ivy-league classrooms to street theatre peace protests and talked transsexuality with the natives in China, Brazil, and France.

Liz Green
Liz Green is currently getting her MFA in Creative Writing from Mills College in Oakland, CA.  A writer/performer and educator, she was the San Francisco Grand Slam Poetry Champion in 2004 and is an award-winning playwright.

Dazier Grego
Dazier Grego is a spoken word performance artist activist and author. His performance works include “Three”, “Where Is Adam?”? and “The Changer and The Changed”.  He is one of the original members of the Deep-Dickollective and has recently graduated from the Experimental Performance Institute at New College.

Antoine Moore
Antoine Moore has dabbled in various types of theatre arts — writing, spoken word, performance, directing.  He is interested in the use of theatre as a vehicle for transforming individuals, communities and cultures.  He has a background in Theatre of the Oppressed and Improv and is currently working towards becoming a Registered Drama therapist.

Rebecca Schultz (Director)
Rebecca Schultz is an artist, educator, and activist. She has created and performed a number of soloperformance pieces; directed several community-basedtheatre projects; taught theatre at schools andcommunity sites throughout the Bay Area; and is a co-founder and facilitator with Bay Area Theatre ofthe Oppressed.  Rebecca has studied with the Siti Company, FoolsFury, Augusto Boal, Headlines Theatre, Michael Rohd, the San Francisco Mime Troupe, Margo Hall, Anne Galjour, and Deborah Slater, and is bringing together everything she’s learned thus far in service of creating a piece that reflects the complexities of queer experience.