WORKING FOR THE WEAKENED
SF in eXile* 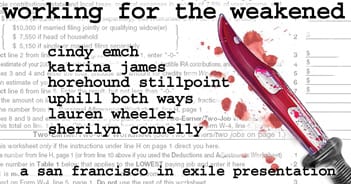 Jobs.  We all have them.  When we don’t, we wish we did.  When we do, we wish we didn’t.  But have ever had a really lousy job?  One that made you want to hurt your boss, yourself, SOMEONE?  This show is for you.  Sherilyn Connelly hosts a local queer cooperative independent non-corporate worker-owned not-for-profit 501c3-certified evening of employment horror stories, including sketch comedy, poetry and storytelling. (What would your admin job be like without Microsoft Word?)  Workers of the world–write!

*This event will be digitally recorded for the SFinX web-based queer artists’ archive.

Primarily a writer of erotica, Katrina James had her first short story published in 1998 and has been creating a steadily growing body of work ever since. She also co-produced the cult public access show kittypr0n and has acted in and worked behind-the-scenes on several local stage productions, including The Night, Batman, Night of the Living Dead, Hitch-hiker’s Guide to the Galaxy, Zippy the Pinhead, and two episodes of The Twilight Zone. When she’s not scouring thrift stores for Catholic schoolgirl skirts or dancing around her kitchen baking absurd amounts of cookies, Katrina can usually be found stalking local sketch comedy group Uphill Both Ways. She currently lives in San Francisco with her two cats. 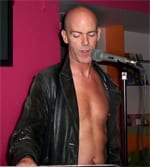 Horehound Stillpoint is a San Francisco waiter/writer who’s been around forever. He has a story in Justin Chin’s Burden of Ashes and he was the muse, supposedly, for Ian Philips’  Satyriasis. His work has been widely published in anthologies such as Poetry Slam, Poetry Nation, Out in the Castro, Pills, Thrills, Chills and Heartache, and I Do, I Don’t.  Seven recent poems are collected in Bullets & Butterflies. He was part of the award-winning Daytrippers theatre group, and had plays in the S. F. Fringe Festival in 2000 and 2001.  Reincarnation Woes, with illustrations by KRK Ryden, is a mini-book out on Kapow! Press, but it is probably not in a bookstore anywhere near you.

Cindy is a queerbot jazz loving, coffee drinking poet grrl who believes that poetry is indeed revolution. She has had her poetry published in Lodestar Quarterly and has self published the chapbooks Autumn Leaves Don’t Always Turn, Notes From A Big Tough Journal, Tobacco Brunette, and Home. She has featured at Varnish Gallery, Femina Poten’s Sizzle, K’vetsch, Smack Dab and other fancypants altars of word worship.  Emch is the all around monkey behind Queer Open Mic at the Three Dollar Bill Cafe, the newest home for rowdy revolutionary performance poetry in San Francisco which is co-hosted by Sherilyn Connelly. She used to rule the pirate radio airwaves with the rowdy radio goodness of the Unka Lynnee & Aunty Cindy Show with Lynnee Breedlove on SF’s own PirateCat Radio. She is also a spoken word curator for the National Queer Arts Festival (2005/2006) and tends to stick her fingers into as many other art related pots as possible.

Always creative, high-energy and bold, Uphill Both Ways (Colin Benoit and David McKew) boasts over 110 performances of their original comedy sketches since January 2002.  UBW has appeared on Haight-Free TV and performed at numerous Bay Area venues including Bannam Place Theater, Spanganga, Dark Room Theater, Mock Cafe, The Marsh, Off-Market Theater, Shelton Theater, Eureka Theater and the LGBT Center.  Additionally, the group has been the official selection of eight national comedy festivals in San Francisco, Los Angeles, Dallas, Atlanta, Chicago, Washington DC and New York.  The group recently made their international debut at Vancouver’s CanWest Comedyfest (2005) where they were honored to appear in the “Best of the Fest” show with such big names as Scott Thompson, Eddie Brill, and Ant.  http://www.uphillbothways.com 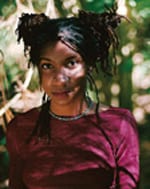 Lauren Wheeler is a recovering slam poet; she competed at the National Poetry Slam in 1998 as a member of the renegade Team SF-Mission District and in 1999 as member and coach of Team Ithaca, NY. She has also featured at Cornell University, where she studied English Literature, in Los Angeles, Miami, and throughout the Bay Area. Lauren was the curator and host of two poetry series in Ithaca, Tongue & Groove at Stella’s Wine and Whiskey Bar http://www.stellabar.com/ and Re-Verse at the Oak Café, and was a core organizer of the ForWord Girls http://www.forwordgirls.com/ poetry and spoken word festival in San Francisco. Her work has appeared in Lodestar Quarterly http://www.lodestarquarterly.com/ and Other Magazine http://www.othermag.org/, and she has self-published two chapbooks, anti-matter and mygration. She can be found online at www.laurenwheeler.com. 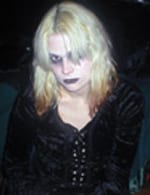 Sherilyn Connelly is a San Francisco-based writer. She’s featured at shows throughout California such as K’vetch, The Unhappy Hour, Poetry Mission, Siren, Ladyfest Bay Area, the TGSF Cotillion, and The Vagina Monologues. Her writing can be found on paper in I Do / I Don’t on Suspect Thoughts Press, Good Advice for Young Trendy People of All Ages on Manic D Press, Girlfriends, and Morbid Curiosity.