Spotlight Stealerz
May 26, 8:00pm
Multi-Discipline
Rainbow Room | LGBT Center 2nd Floor
TIX $8-$15
Stealing the spotlight back from whoever stole it from them, the Spotlight Stealerz come to the stage with light (duh) and love.  Through their homie-ship, they are fanatic about shedding light on both the exquisite and atrocious aspects of being alive in this day and age. Whether it’s romance, break ups, family, community, neighborhoods, spirituality, paying the bills (or not!), modes of transportation- they have something to say about it! Calling all immigrants, mixed race, people of color, queers, & community organizers to join us on our excursions to steal back the spotlight and shine it on who
matters: all of US!Who we are? Spotlight Stealerz – a Los Angeles-based theatre/comedy performance troupe – weave individual stories and group sketches together to explore a range of issues within their multiple experiences, identities and communities (Xicana, Tamil-Sri Lankan, Filipina, lesbian, queer, stud, immigrant, mixed race). The Stealerz was created, founded and based on the writings of Adelina Anthony, D’Lo and Alison De La Cruz. Each Stealer comes with their own flavor to add to the comedic, heart felt and engaging stew. 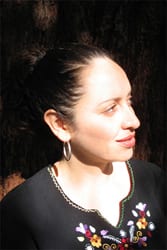 Adelina Anthony
Adelina Anthony has just finished a run of her hit show “Mastering Sex and Tortillas!” which was recognized as an L.A. Weekly Theatre Critics Pick of the Week.  She plans to premiere “Bruising for Besos” this year.  Adelina has over 15 years of stage experience, garnering Best-Actress nominations in comedy and drama. She has twice participated as an actor for Chicana/o stage readings at the National Queer Arts Festival. Adelina has performed with Teatro Dallas (including two international festivals), Santa Monica’s Highways Performance Space, Los Angeles’ Celebration Theatre, San Francisco’s Theatre Rhinoceros and Brava Theatre, San JÃ³se’s Teatro VisiÃ³n, New York’s WOW Cafe, and Dallas’ Cara MÃ­a Theater Co. (which she founded in 1996). She has worked with directors Cora Cardona, Patrick Kelly, CherrÃ­e Moraga, Mark Valdez, Daniel Alexander Jones, and Tracy Ward. She is krazy excieted about being part of Spotlight Stealerz.
(www.adelinaanthony.com) 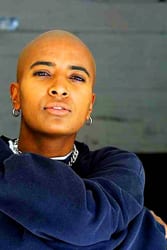 D’Lo
Described as a “jolt of creative and comedic energy”, D’Lo is a Tamil Sri Lankan-American, political theatre artist/writer and music producer, currently causing the most trouble in Los Angeles .  Her work includes comedy,  hip hop theatre, dance, poetry, and music. D’Lo has performed at various conferences, showcases, political events and poetry readings and venues across the U.S. and internationally. In addition to a B.A. in ethnomusicology from UCLA, she trained in NYC in sound engineering. D’Lo’s career work has included being part of several performance groups; working closely with diverse youth as a teaching artist; establishing herself as both a solo and collaborative performer and being published in various magazines and anthologies. In 2004, D’Lo had a sold-out NYC run of her first play “Ballin’ With My Bois” a queer hip hop theater piece.  Currently, she touring with her one person show “Ramble-Ations: a One D’Lo  Show” as well as causing a ruckus in the theatre/sketch comedy group “Spotlight Stealerz”. (myspace.com/dlocokid) 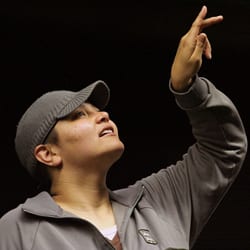 Alison M. De La Cruz
Alison M. De La Cruz is a multi-disciplinary artist, community-based cultural worker and one third of the Spotlight Stealerz. Her work has been presented by the Center Theatre Group at the Kirk Douglas Theatre, at the David Henry Hwang Theatre, the Northwest Asian American Theatre, Highways Performance Space, Bindlestiff Studio, Yerba Buena Center, The Lab, and the Asian Arts Initiative. De La Cruz is  the Poet, Narrator, and Associate Producer on the feature-length documentary “Grassroots Rising: Asian American Working Families in Los Angeles.” A member of the Pilipino Artist Network,  De La Cruz  is currently the Festival Director for the Los Angeles Festival of Philippine Arts and Culture, presented by FilAm ARTS. De La Cruz is also writing the book and lyrics for a new musical commissioned by East West Players in Los Angeles. You can find out more about De La Cruz at www.myspace.com/alisonmdelacruz

FOLLOW US!
ABOUT NQAF 2008The GAPA Show
Scroll to top