Ramekon O’Arwisters’ exhibition, Sugar In Our Blood, is an autobiographical exploration of sexual stereotypes in the LGBTIQA and African-American communities. Folk-art traditions and techniques are physical stand-ins for race, sexuality, and spirituality in his work. Sugar In Our Blood is a collection of mixed-media installations including a collaborative, community-based art project that uses the folk-art tradition of rag-rug making to reference intertwined themes of domesticity, sexuality, and spirituality. Large rag-rug tapestries made from intimate apparel, nightgowns, and shirts are combined with church hats, family photographs, and other cultural icons. His community-based sculptures reference the American histories of gender, sexuality, and racial politics, creating a timely critique of our prevailing national anxieties. 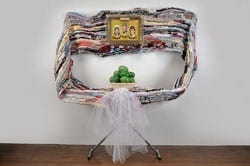 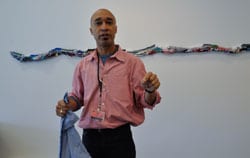 He has been actively involved in residences and guest lectures at Djerassi Resident Artists Program, Vermont Studio Center, and Sonoma State University. O’Arwisters was April 2012 artist-in-residence at the M. H. de Young Museum. His works are included in the public collections of the Mary Lou Williams Center for Black Culture at Duke University and the Haley Charitable Foundation, Point Richmond, California. He is currently working on an exhibition about art and spirituality, Sugar In Our Blood: The Spirit of Black and Queer Identity, for a one-person exhibition at the African American Art and Culture Center (AAACC) in June 2013.