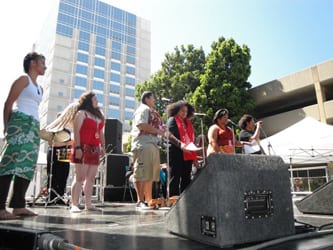 One Love Oceania has been funded by the SF Arts Commission’s Native American Arts and Cultural Traditions Grants program, APICC and Qcc.

Erica Nalani Benton is a singer/songwriter from the Bay Area of Chamoru, Hawaiian, and mixed European descent. Her work deals with a variety of themes including self-determination, displacement, healing, resiliency, seduction, lust, and love. She is currently a student at Ohlone College and working on her first album.

Fuifuilupe Niumeitolu is a Tongan American scholar, artist and community activist. She is on the founding and organizing committee of OLO. She is also an Ethnic Studies doctoral student at UC Berkeley.

Jean Melesaine is a Samoan writer, photographer, visual artist, filmmaker, educator, and founding member of OLO. She was raised all over the Bay Area from San Jose to San Francisco. She is Associate Editor of De-Bug Magazine, a monthly publication that covers local to international arts, news and politics from the grassroots perspective, and part of Sillicon Valley De-bug, a media arts organization for youth.

Loa Niumeitolu is a Tongan American writer, scholar and community organizer. She is a founding member of OLO and works as an advocate for Pacific Islander communities, prisoners’ rights, and is a big fan of her 12-year old son Nikolasi.

Michelle Kaonohikaimana is a musician, artist and student of Native Hawaiian and European descent. She was raised between Hawai’i and San Francisco. When not making music or conspiring to make the world a better place to be in, she is a student at City College of San Francisco studying music and psychology.

Neo Veavea is a Samoan American artist, community organizer and father. He cofounded the first Samoan Group at the 1984 SF Pride Parade and the first Pacific Islander LGBTQ group in the Bay Area called UTOPIA, founded in 1998. Public access cable TV watchers recognize him as the “Ghetto Chef” from his former cooking show “Siva Café.” He coordinates the Visitacion Valley Ukulele Club for youth.

V.J. Fiefia is a Tongan dancer and a traditional weaver who grew up in Salt Lake City and now lives in San Mateo. He is an active member of UTOPIA. 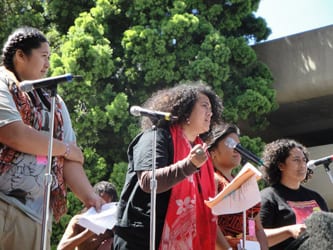