New year, same Bush. But what about the nation that elected him? The red voter revolution has begun. And blue is the new 1950’s red. But how can queers, usually the freakiest in the lot, create any kind of working relationship on the national, state, or local level with the fundamentalist Christian right which sees them as forever damned? Is this a war between queers and religious fundamentalism?

Patrick Califia
Patrick Califia began his authorial life as a leatherdyke who shocked queer audiences in the early 1980s with explicit accounts of sadomasochistic wimoon love. Transitioning to a male identity years ago, he now makes genetic gay men very uncomfortable with his tales of MSMs who were not issued XY chromosomes in God’s baby factory in the sky. He believes that writing about sex has the potential power to confront and heal our wounds, or acquire more of them, depending on what blows your Utilikilt up.

MATTilda a.k.a. Matt Bernstein Sycamore
MATTilda a.k.a. Matt Bernstein Sycamore is the author of Pulling Taffy and the editor of three anthologies: That’s Revolting! Queer Strategies for Resisting Assimilation, Dangerous Families: Queer Writing on Surviving, and Tricks and Treats: Sex Workers Write About Their Clients. She is an instigator of Gay Shame: A Virus in the System, a radical queer activist group that fights the monster of assimilation.

Jaime Cortez
Jaime Cortez is a Bay Area author, visual artist and cultural worker. His fiction has been published in numerous anthologies and he served as the editor of the groundbreaking Latino anthology Virgins, Guerrillas & Locas, and the HIV prevention journal Corpus. His first graphic novel Sexile was nominated for the National Library Association award. Jaime is currently pursuing his MFA in art at UC Berkeley.

Joel Barraquiel Tan
Joel Barraquiel Tan was born in Manila in 1968. He is the author of two volumes of poetry, Type O Negative and Monster. Joel is also the editor of Cleis Press’ Best Gay Asian Erotica and his works appear in various academic and commercial venues in the US and abroad. He is currently developing Sons, a poetry-based performance and a history-based poetry manuscript and opera collaboration, Savage I with award-winning composer Francis Wong.

Justin Chin
Justin Chin is the author of Attack of the Man-Eating Lotus Blossoms, a collection of performance art texts, documents, and scripts; two collections of poetry, Harmless Medicine and Bite Hard; and two collections of essays, Burden of Ashes and Mongrel: Essays, Diatribes and Pranks. Harmless Medicine was a poetry finalist at the 2002 Bay Area Book Awards, the Lambda Literary Awards, the Publishing Triangle Awards, and the Asian American Literary Awards. Chin’s writings have also been anthologized widely: most notably in The Outlaw Bible Of American Poetry, American Poetry: The Next Generation, and The World In Us: Lesbian and Gay Poetry of the Next Wave, among others. He lives in San Francisco.

Greg Wharton
Greg Wharton is the publisher of Suspect Thoughts Press [www.suspectthoughtspress.com]. He is the author of Johnny Was & Other Tall Tales and the editor/co-editor of numerous anthologies including I Do/I Don’t: Queers on Marriage and Sodom & Me: Queers on Fundamentalism (both with husband Ian Philips). He lives in San Francisco with his brilliant and sexy husband, a cat named Chloe, and a lot of books.

Juba Kalamka (aka Pointfivefag)
Though he has been a recording artist since 1988, Juba Kalamka (aka Pointfivefag) is most recognized for his recent work as a founding member of “homo-hop” crew Deep Dickollective (D/DC) and creation of the label Sugartruck Recordings. In addition to work as a contributing writer and illustrator for Anything That Moves, Kitchen Sink, and Colorlines, he served as Festival Director for East Bay (Oakland) Pride 2003 and developed the accompanying PeaceOUT World HomoHop Festival, now in its 5th year. Kalamka’s second solo CD, Oogabooga Under Fascism, will be released on Sugartruck in late 2005. 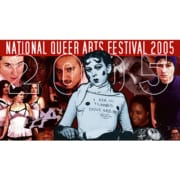 Sampler: Our Bodies, Our Choice