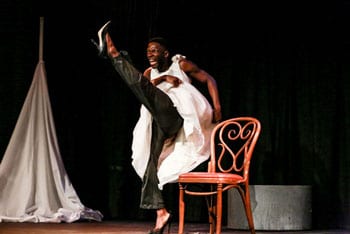 If you are interested in having this performance interpreted for the hearing-impaired or deaf, please contact managing@queerculturalcenter.org by May 31. Thank you.

In Lagos, Nigeria, a young boy tries on his mother’s wedding dress and discovers a liberating world of make-believe. His dreams of a dazzling theatrical career bring him to America, where he discovers that he’ll first have to leap over obstacles placed by an industry that isn’t always welcoming to applicants who are neither white nor straight.

In this hilarious solo show, which premiered at NQAF in 2016, San Francisco Mime Troupe and Beach Blanket Babylon veteran Rotimi Agbabiaka shape-shifts from character to character and uses monologue, song, dance, and drag to embody, explore, and expose the battles minority artists fight in the exclusive world of mainstream American theatre.

Based on Rotimi’s real life experience as a professional actor, Type/Caste is a fast paced and humorous journey into the peaks, pitfalls, and hallucinations of a young artist’s quest for success in a gentrified and commercialized industry. Hailed as a “spectacular, neon-drenched coup-de-theatre,” Type/Caste is a personal look at the politics of (mis-) representation on the American stage. 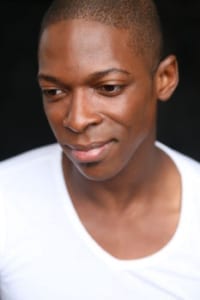 Rotimi Agbabiaka (writer, performer) is an actor, singer, writer, director, and teaching artist. He most recently appeared in Bootycandy at Brava Theater, Schooled (Thomas Jones) with the San Francisco Mime Troupe, Sojourners (Disciple Ufot) and runboyrun (boy) at Magic Theatre, in Hair (Hud) with Bay Area Musicals, Holiday High Jinx (Dancing Dan) with Word for Word, Choir Boy (Junior) at Marin Theatre Company, The Amen Corner (David) with Alter Theater, We Are Proud To Present … (Another Black Man) at Just Theater, and Raisin in The Sun (Asagai) at Cal Shakes. He is a collective member of the San Francisco Mime Troupe, a former cast member at Beach Blanket Babylon, and his solo play, Homeless, won Best Solo Performance at the SF Fringe Festival. As a director he helmed the world premiere of VS. at TheatreFIRST. He also teaches youth theatre with Each One Reach One, SF Shakespeare, and the SF Mime Troupe Youth Theatre Project, and is the Features Curator for Theatre Bay Area’s online magazine. He studied at Moscow Art Theatre and earned his MFA from Northern Illinois University. Learn more at http://www.rotimionline.com/ 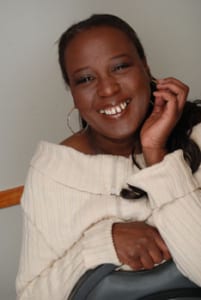 Edris Cooper-Anifowoshe (director) is an award winning actor, director and writer and is the founding artistic director of Black Artists Contemporary Cultural Experience, a resident company at Brava! For Women in The Arts. She most recently directed Robert O’Hara’s Bootcandy at Brava and the world premier of Philip Howze’s all of what you love and none of what you hate at SF Playhouse. She is the creator of several solo pieces including Traveling While Black, which premiered in the Brava Studio in 2014, and the published Adventures of a Black Girl In Search of Academic Clarity and Inclusion (Northwestern University Press). As a director, Cooper-Anifowoshe has worked nationally at Trinity Repertory Company, Capital Repertory, Southern Rep in New Orleans, Mark Taper Forum, Alabama Shakespeare Festival, Woolly Mammoth, Curious Theatre in Denver, and Arts Theatre, Ibadan, Nigeria. Cooper-Anifowoshe’s Bay Area directing credits include the West Coast premieres of Relativity at the Magic Theatre, The Old Settler at TheaterWorks in Palo Alto; Crying Holy at Theatre Rhinoceros, and Urban Zulu Mambo and Blue/Orange at Lorraine Hansberry Theatre. At Brava with BACCE, Cooper-Anifowoshe directed West Coast premieres of Sweet Maladies by Zakiyyah Alexander (winner of TBA Award for Best Ensemble) and In a Daughter’s Eyes by Oakland native, A. Zell Williams. She holds an M.F.A. in Directing from the University of Iowa.

Brontez Purnell (Composer) is a dancer (Brontez Purnell Dance Company), writer (Maximum Rock N Roll, The Cruising Diaries, Fag School Fanzine) and musician (The Younger Lovers). He is a native Alabamian who currently resides in Oakland, CA. “Johnny Would You Love Me If…” is his debut novella.

Jason Hannan (Sound Design) is the artistic director of Tranimation Studios, an underground production company, specializing in nightlife and theater entertainment. Best known for creating Dragiscals™, a drag performance as a musical parody, with a fully lip-synching cast. dragsical.com