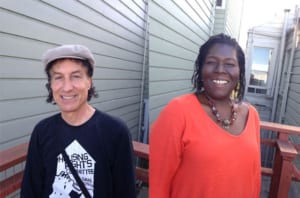 A Roof Over My Head is a original musical by Tommi Avicolli Mecca and Alison C Wright that reflects the absurd nature of the SF Bay Area’s housing crisis. Focusing on a the building of neighbors who receive an Ellis Act Notice from their ‘flip happy’ landlord, their story exposes what other tenants have been subjected to: being bullied, pushed out, or burnt out while they fight to keep a roof over their heads.

This project is presented with ARTS Q, a group that is using the Arts to address current elimination of affordable housing due to the greed of developers, speculators and relators who are putting profit over housing for all residents of the Bay Area. This is the first public reading on its way to a full production. 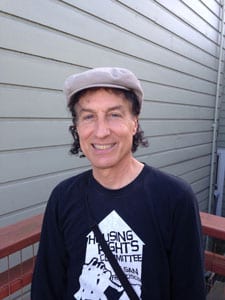 Tommi Avicolli Mecca is an accomplished playwright, actor and musician from Philadelphia. After moving to San Francisco in 1991 he created and performed 2 solo works at Josie’s Cabaret and Jon Sims Center. In the late ‘90’s he wrote three one–act plays as a part of residencies at Jon Sims Center. His work has appeared in the National Queer Arts Festival and YBCA daytime performance series. As a composer he contributed music to three stage productions. His most recent bio-musical called “This Boy Is Just So Strange”, debuted in 2014 at the Eric Quezada Center in the Mission District. 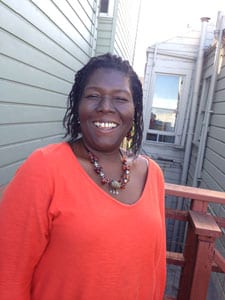 Alison C Wright made her debut on the SF Arts scene with Yippie Production’s Art Is Propaganda performed at SOMArts and fiscally sponsored by Intersection for the Arts. Through the years she has worked with Ann Galjour, Ellen Sebastian Chang, Rhodessa Jones and Thomas Simpson. Her solo works Ms Thang, Europe’s That Way and Mr. Backlash received an SFAC Individual Artist Commission. And You Can’t Make Me – a story of Gladys Bentley also received an SFAC IAC award and appeared in the 2000 National Queer Arts Festival. Some of her other credits include: AIDS Camp and Switch–which both appeared in the Frameline Film Festival, appearances in the Afro Solo Festival for four years in a row, YBCA (main stage – Garden performances), and the Solo Mio Festival.