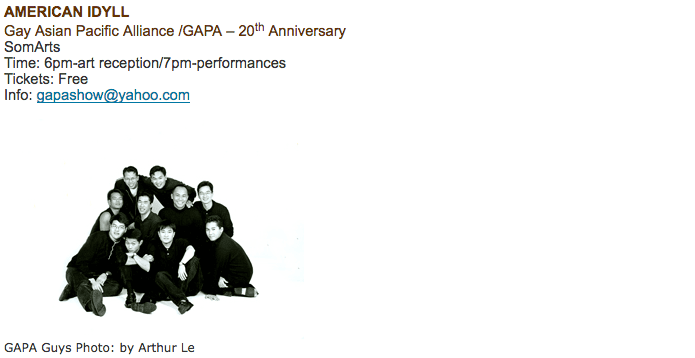 Gay Asian Pacific Alliance (GAPA) presents American Idyll (The GAPA Show 2008), a multimedia event featuring visual arts, written word and performance that explores what it means to be gay and American when one is of Asian & Pacific Islander (API) heritage.

Now celebrating its 20th Anniversary, GAPA is dedicated to furthering the interests of gay & bisexual APIs in the San Francisco Bay Area and beyond. Through its cultural efforts, GAPA hopes to promote cultural diversity within the larger mainstream community, while also allowing gay APIs to take control over how our images and our identity are presented.

FOLLOW US!
I Touch MyselfRadar Reading Series 2008
Scroll to top