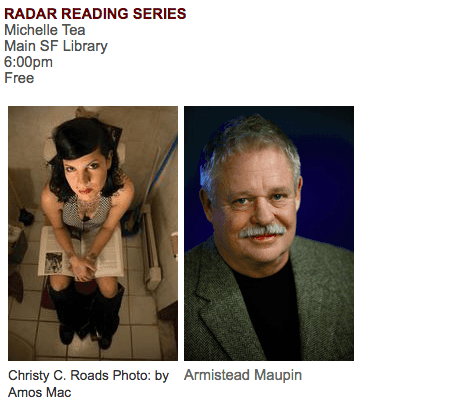 Though Armistead Maupin was one of the first of a new breed of openly gay authors, his appeal has always resided in his inclusiveness as a storyteller. For over thirty years his beloved characters from 28 Barbary Lane in the Tales of the City series have cut an unprecedented path through popular culture—from a groundbreaking newspaper serial to six internationally bestselling novels to a Peabody Award-winning miniseries starring Olympia Dukakis and Laura Linney. In 2006, an online poll of British readers named Tales of the City the UK ’s all-time favorite gay or lesbian novel. In 2007, in a long-awaited return to that lore, Maupin revisited one of his most beloved Tales characters in Michael Tolliver Lives.

Armistead Maupin’s New York Times bestseller The Night Listener created a sensation in the publishing world when its real-life origins were revealed in an article by The New Yorker and a follow-up investigation by ABC ’s 20/20. The psychological suspense novel was inspired by Maupin’s longtime telephone friendship with Anthony Godby Johnson, a 14-year-old memoirist whose very existence Maupin began to question. “It was like living in the middle of a mystery novel,” Maupin said. “Once it started happening I knew I had to write about it.” He wrote the screen adaptation of The Night Listener, starring Robin Williams and Toni Collette, which premiered at the Sundance Film Festival and was distributed by Miramax pictures.

Armistead Maupin is also the author of the bestselling novel Maybe the Moon, which chronicles the misadventures of a dwarf actress working in Hollywood. He wrote the narration for the award-winning documentary “The Celluloid Closet,” and was himself the subject of an hour-long BBC documentary; “Armistead Maupin Is a Man I Dreamt Up.” As a librettist, he collaborated in 1999 with composer Jake Heggie on “Anna Madrigal Remembers” for mezzo-soprano Frederica von Stade and Chanticleer, the classical choral ensemble.

Maupin lives in San Francisco with his husband, Christopher Turner.