EXIT SIGN: A ROCK OPERA  “get ready to believe in…”
Written & Directed by Carrie Baum with collaboration by the cast
Voice Factory
8:00pm 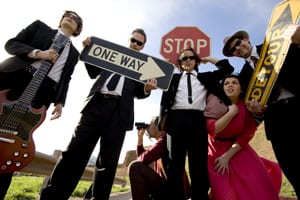 In this rock-n-roll musical adventure story, a father and his queer daughter travel through experiences of time, mortality, death and love while navigating extreme and unexpected turns along the way.  Merging humor, irony, and kick-ass ensemble vocals, Exit Sign celebrates both the greatness and absurdity of our humanity.

While casually watching TV our father and daughter are suddenly summoned by an intriguing force from within their own television screen.  They have been chosen to find the ever elusive and proverbial “IT” and bring “It” back to save human kind from the perils of itself.  Their travels take an unforeseen turn when the father is fated to take a solo detour at the Exit Sign (He dies). The journey continues as they both find ways to deal with this severe and sudden change in plans as it transforms them both in surprising ways. http://www.myspace.com/exitsignrockopera

Carrie Baum (Composer/Director/Chorus/Guitar) has been a musician for 26 years, creating music for bands, dance, theater, and film. As a founding member of the all-queer bands Soul Divine & Kindness, she has played the Gay Pride Main Stage, the Dyke March, the Michigan Womyn’s Festival, and just about every major and minor rock club in San Francisco. She was musical director for the wildly-popular underground phenomenon, Crash Cabaret: Where Queers Collide and Heterosexuals are Encouraged to Apply. Currently she co-captains Dreamboat, Where Are You? featured as a Flaming Creator  in the San Francisco Bay Guardian’s 2007 Pride issue.

Jamie Ben-Azay (Daughter/Lead Vocals) As a founding member of The Woodyz and WOOD, San Francisco’s Live Drag Musical Reviews, Jamie has performed nationally at Gay Pride festivals, the grand opening of the Gay and Lesbian Community Center, the 25th Anniversary of the Rainbow Flag, and San Francisco’s Annual Drag King Contests. Jamie was featured in Play Date which had its debut at the Frameline Film Festival and is also in Drag, a documentary about drag in San Francisco. Jamie spent five years singing with the a cappella ensemble Samsara. She currently works as a drama therapist with adolescents.

Steffanos X (Father/Lead Vocals) For the past nine years Steffanos has been lead vocalist of the highly acclaimed Tom Jones tribute band Tom Jonesing.  His acting career has found him in such various roles as Lucky the cat in Lovesick: The Cat Allergy Musical, Lazarus the dog in the musical Emperor Norton, Colonel Mustard in Clue, the villainous Ramses in the Darkroom Theater’s production of The Ten Commandments, and Kramer in a Seinfeld based Twilight Zone episode.

Dean Mermell (Video Direction-Editing/Chorus/Keyboards) has been keyboardist for the highly acclaimed Tom Jones tribute band Tom Jonesing. and the now extinct groove contraption, Kundalini Kombo. When he was 17 he began creating the music and sound effects for a theater group. These days he’s a filmmaker and film editor in San Francisco: www.storyfarm.com. His films, which he writes, directs, edits, and scores, have won awards from the SF Int’l Film Festival, the California Independent Film Festival, and the Moondance Film Festival, and have also screened at the Mill Valley Film Festival, among others.

James Paulino (Cedar Woods) (Recording Production/Chorus/Bass Guitar) has been involved in the San Francisco scene as a musician/songwriter/producer/engineer for over 15 years. Having worked for Hyde St. Studios & as well as 5 years with Bill Graham Presents, Cedar has had the chance to work with many major touring acts including U2, The Rolling Stones, The Grateful Dead, Pearl Jam, Green Day & Jane’s Addiction. Cedar has played bass in a variety of bands/projects such as The Free Thinkers of The Universe, Japanese recording artist Pak Poe Band, and the ethnic trance didgeridoo ensemble Pele’s Tears.

Erik Gross (Chorus/Drums) has been playing music in San Francisco for 15 years. Erik has performed audio visual presentations at the Journeys show series (a performance art showcase), as well as co-writing and performing songs with various artists in the San Francisco Bay Area. Erik was co-member/creator of the band The Free Thinkers of The Universe and his current projects include the band Grasshopper as well as Exit Sign: A Rock Opera.

Blue Buddha (Lead Chorus Vocals) is a singer/songwriter/activist. He has a unique voice with great range, power and emotion. Blue was the Producer of the Soul of Pride African American Stage and Village in 2003, 2004 and 2006. He has performed at such benefits as Critical Resistance, NORML, Amnesty International, St. James Infirmary 4yr Anniversary (clinic for sex workers) and Radical Performance Festival (benefiting inner city kids in leadership and the arts). He has worked extensively with people with developmental disabilities, drug addiction and mental health issues. Blue currently does research in the HIV/AIDS community and volunteers as an HIV Counselor.

Susan Appe (Lead Chorus Vocals) is a voice and music teacher, visual artist and community activist. She teaches drumming and music to kids and adults of all abilities, builds giant puppets for street theater and works with youth doing community based music and art. Susan has sung in everything from an a cappella trio to a ten piece soul review, and she is thrilled to be rockin it with Exit Sign. Susan’s website is: web.mac.com/susanappe <http://web.mac.com/susanappe> for more about her work.

FOLLOW US!
QueLaco 2008 Untold Stories & Fighting Back
Scroll to top