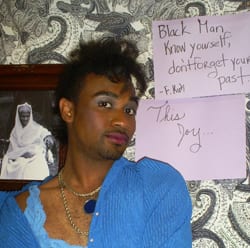 Children of the Last Days is a semi-autobiographical, multi-media performance piece that explores, juxtaposes and satirizes the modern Black church and the Black gay community. Thandiwe Thomas De Shazor uses prose, monologue and dance in this colorful and comedic commentary on the past, present and future.

Thomas has been performing for over ten years in such shows as Oklahoma, The Music Man, Lysistrata and Ron Allen’s Tibetan Book of the Dead.  Thomas has studied under Hilary Ramsden, co-founder of the Furniture Factory and was an apprentice at Oakland University’s Meadowbrook Theatre. As a writer, he was first published at age 19 in Between the Lines Newspaper where he became a staff writer and wrote the weekly entertainment column “Check This Channel Out”. Most recently, his story “Pussy Pass it On” was published in If We Have to Take Tomorrow, an anthology of black gay writers. Since moving to California he has toured singing with artist Ri Ri Garcia, performing at The House of Stormz and San Francisco Gay Pride. Thomas also performed at the 2007 NQAF event Why are Faggots so Afraid of Faggots?

This Is The Thing

Show and Tell The Outsiders
Scroll to top