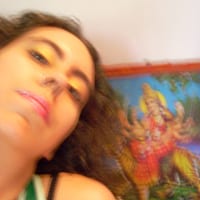 Photo credit- self portrait by Leah

The Grown Woman Show is a fearless, sexy and powerful one-woman show about a long-term incest survivor and a femme of color making love, family and heartbreak within queer and trans of color communities. Using storytelling, spoken word, ritual and movement, Leah traces one year in her life as she leaves her long-term white partner and returns to finding love and trouble in a series of new lovers of color – while simultaneously attempting to reconnect with the family she hasn’t talked to in a decade.

Leah Lakshmi Piepzna-Samarasinha is a queer Sri Lankan writer, spoken word artist, arts educator and cultural worker. The author of Consensual Genocide, she has performed her work widely across North America, including performances at the Swarthmore College, Yale University, Oberlin College, Sarah Lawrence College, University of Southern California, and at Femme 2006, Bar 13, Gendercrash, The Loft, and the RADAR Reading Series. Her writing about queer and young women of color activism has been widely anthologized, appearing in Homelands: Women’s Journeys Across Race, Place and Time, We Don’t Need Another Wave, BitchFest, Colonize This!, With a Rough Tongue: Femmes Write Porn, Without a Net, Dangerous Families, Brazen Femme, Femme, and A Girl’s Guide to Taking Over the World. For the past ten years she has worked as a counsellor around sexual assault and domestic violence, as a feminist crisis line worker, queer youth worker and member of INCITE Women of Color Against Violence.From 2003-2007 she produced Toronto’s acclaimed Browngirlworld queer/trans of color spoken word series. With Maria Cristina Rangel, Piepzna-Samarasinha is the co-founder and co-Artistic Director of Mangos With Chili, an annual touring cabaret of queer and trans people of color artists. She has taught writing, spoken word and performance to LGBT youth for six years through Supporting Our Youth Toronto’s Pink Ink program, winning a 2004 Community Service to Youth City of Toronto Award and Best Zine of Toronto in 2005. In 2005 she co-founded Toronto’s Asian Arts Freedom School, a writing, activism and radical Asian history program for Asian/Pacific Islander youth.Recently relocated to Oakland, California, after running away from America for a decade, she is completing her MFA in Creative Writing from Mills College and finishing her second book, Dirty River, a memoir of coming of age as a young queer brown survivor in mid 90s anarchist, queerpunk and women of color movements. She is a collaborator on The Revolution Starts At Home, a zine and online resource about partner abuse in activist communities. Her website is www.brownstargirl.com