A multidisciplinary exhibition that will focus on the impact of the contemporary AIDS crisis among young queer and trans folks in the San Francisco Bay Area.

A 2-day event that features an evening of performance and film, followed by a weekend day panel.

A multidisciplinary performance which explores the experiences of LGBTQI individuals raised in San Francisco during the 80s and 90s and currently residing in the San Francisco Bay Area.

This theatrical performance exploring queer stories through circus arts expands to 3 shows and incorporates youth training and participation in 2014.

This evening-length multidisciplinary performance piece chronicles the iconoclastic life of Samuel Steward (1909-1993), a college professor, a prolific author of homoerotic fiction, an influential tattoo artist, and a Queer sexual rebel.

A premiere rough-cut video screening of a feature documentary that tells the stories of SF Bay Area Queer Latino/as who are living with or have died of SIDA/AIDS during the years 1988 to the present.

A multi-media performance event based on a novel-in-process by Nomy Lamm that articulates a body politic based in experiences of trauma and transformation.

A queer and trans people of color multigenre performance exploring ritualized, underdocumented moments in queer and trans Black, Indigenous and People of Color’s bodies and autohistoria.

This multi-disciplinary performance will present a queer perspective on the theme of love as a universal human emotion, explored theatrically through the fusion of contemporary circus and song.

Lex Non Scripta
Out of Place

A one night performance, visual and video arts showcase exploring issues of mental health and madness in a Queer context. The event will attract an audience of 175 people and funds will be used to contribute to artist’s stipends, curatorial stipends, venue rental and marketing.

A hybrid of sculpture, visual art, and street performance that will explore queer migration and displacement through the metaphor of home, furnishings on the move.

A literary performance of an excerpt of the forthcoming novel as well as a Q&A and discussion her book and performance.

A performance and book release of the poetry of Maya Chinchilla published by Korima Press in 2014.

An experimental sexplicit collection of short film and video works that explore sensuality, intimacy, safety and consent through the lens of the less-represented.

Irina Contreras
We are not sleeping: the queer body in duration

An exhibition utilizing performance and performance-based video to explore the ways in which artists are currently performing (de)colonized identities.

An evening length dance theater work based on the writings of noted artist and writer David Wojnarowicz’s Memories That Smell Like Gasoline to explore the collision of LGBT culture with the mainstream culture.

Crystal Azul and Gr Keer
Self Portraits by Queer Youth

An exhibition of 20 works curated by Crystal Azul and Gr Keer that will explore how queer youth navigate their identities through self-portraiture.

A multidisciplinary performance piece and installation that will create a platform exploring queer visions of the future. 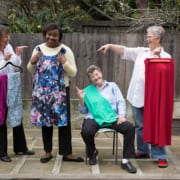 FOLLOW US!
QUEER CONVERSATIONS ON CULTURE AND THE ARTS