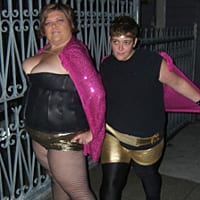 Rally the Troupes 4: A night of savvy political and sexy queer performance!
Bay Area favorites, Drew Montana & Kentucky Fried Woman have rounded up an eclectic mix of drag kings, queens, and burlesque artists from the Bay Area and beyond. These performers have a knack for nailing each song with innovative moves and messages.  From the powerful presence of Tucson’s Boys R Us, to the hysterical stylings of CHUBB to the always brilliant staging of Thatway, Rally the Troupes 4 is an event you will not want to miss!

Drew Montana was a founding member of the Transformers, producers of Rally the Troupes for the last three years. This year he is excited to be producing with KFW for the 4th year. His main focus these days is working with CHUBB, Hogwarts Express: The Musical and with other bay area performers to design shows and numbers that involve great dancing, glitter, and responsible performances! www.myspace.com/popking

Kentucky Fried Woman (KFW) was a member of the Santa Barbara based drag performance group, the Disposable Boy Toys before moving to Seattle and founding the Queen Bees in 2002. In 2005 she said goodbye to the Queen Bees and moved to Oakland where she co-founded ButchBallet, ButchTap & Titland.

Krista has also been a part of Hogwarts Express: The Musical and has been the producer behind the 2008 Lewis and Clark College Gender Symposium’s Friday Evening Performances and Make it Big! A Wham! Tribute Show. KFW’s non-performance activism includes producing panels and workshops on the intersections of identities and bodies. She currently serves as Chair of the International Drag KingCommunity Extravaganza Board and will be program Coordinator for the upcoming Femme 2008 Conference. 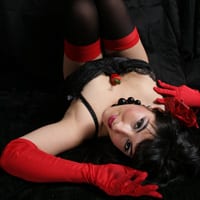 Ms. Cherry Gallete is a Chicana and Moroccan burlesque artist, theater-maker, and curator committed to telling post-colonial fairy tales of modern resistance that celebrate queer desires, histories, survivals, migrations, and revolutions through movement based in Afro-Brazilian, Arabic and Latin dance forms. Cherry has presented work as a solo artist on stages across North America, and is Co-Founder and Artistic Director of Mangos with Chili, a multi-genre touring cabaret of queer and trans people of color artists. Learn more and find updated performance dates at www.myspace.com/ms_chachacherry. 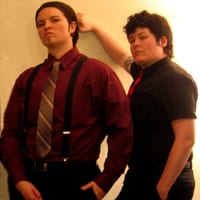 The Citizen Kings are some of the boldest drag performers to seduce Bay Area audiences with their sexy, politically-charged numbers. Their provocative performances, which address sexuality and popular politics, are not for the faint of heart or fixed of gender. These kings thrilled audiences with political bondage at International Drag King Extravaganza, SFDK10 (Best Troupe: Runner Up) and slappin’ leather brokeback-style at SFDK11 (Best Troupe: Runner Up). They have also performed at Oakland’s infamous Coochielicious, and Rally the Troupes. Ladies love them, boys adore them . . . who’s yer favorite Citizen King: Blue Yonder & Rider Strong. 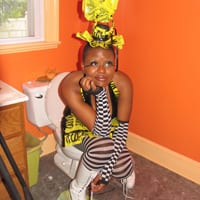 Thisway/Thatway (aka Stephanie Cooper) is a multimedia performance artist who enjoys the happy collision of glitter and theory. The consummate candy-fag, s/he expresses her queer/black-panamanian/immigrant/feminist/anti-authoritarian sensibilities with humor and analysis. Currently based in California’s Bay-Area, s/he is pursuing a degree at Mills College in Intermedia Arts and Ethnic Studies. 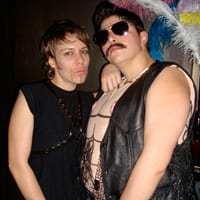 A life-long connoisseur of faggoty fun, Jay Walker enjoys dirty glam, choreography, and tear-away pants. He is best known as a flamboyant, genderfucking faggot with an edgy, sexy stage presence and an insatiable lust for working bedazzled man-thongs.

Delicio Del Toro is a tall, dark, and handsome café con leche heartthrob who was kicked out of Catholic School for one too many pelvic provocations. He has a weakness for cupcakes, uniforms and gay-ass music. Bonded by their love for ass-shaking and bending each other over, this pair can be found shooting their gaywads in the Trans Francisco Gay Area.
www.myspace.com/kingjaywalker
www.myspace.com/mrdeltoro 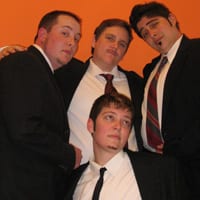 These chunky hunks are ready to punch your clocks and work it overtime with flabulously sexy king-sized faggotry. They made their debut two years ago at Rally the Troupes and are back! Drawn together by their fetish for accessories, lust for lunch breaks, and urge to undulate they dare to live large and dream big. Featuring Drew Montana, Jake Danger, Beary Craves, & Delicio Del Toro. CHUBB, because size . . . does matter! 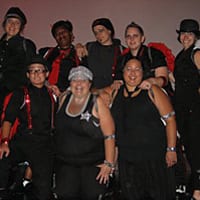 Brought to you by the creative geniuses behind ButchBallet, ButchTap is a loose collective of Oakland, CA based queer performance artists who have a passion for tap dancing, fabulous costumes and dance-offs.   ButchTap includes current and former members of Chicago Kings, Cuntry Kings, Disposable Boy Toys, Nappy Grooves, Queen Bees, Titland, Transformers & Twilight Vixen Revue.  So, prepare yourself for a heavenly treat as these performance veterans explode into your hearts with the footloose and fancy-free percussion sounds so unique to tap dancing! 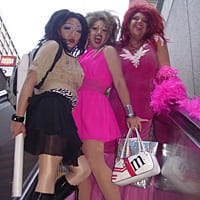 This trio is made of Landa Lakes, Samantha Richards and Miso Hornay. Landa is a former Ms Gay Indian Nations, Ms Osage Hills and Ms Trannyshack Starsearch. Landa (Chickasaw) introduces audiences to Native American politics through humor and provides Native American visibility to the larger LGBT community. Samantha (Navajo) is an expert costume designer and builder, as well as a mask maker, actor and singer, in 2007 she and Landa received a Fresh Fruit Award for best performance. Miso (Vietnamese) has been performing and traveling with the troupe since 2005 as well as performing in Trannyshack Hawaii in 2007. 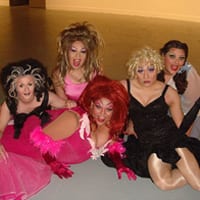 Holotta Tymes, Landa Lakes, Terra Cotta, Samantha Richards and Miso Hornay make up this collection of fabulous drag queens. Holotta, of Finocchios fame, has been delighting audiences at the Starlight Room with her out of this world style. Landa has been enjoying her Sunday’s at Mecca’s Brunch with a Punch since 2007. Terra, a recent transplant from Ohio, has been living it up even making an appearance in the drag version of the Golden Girls. Samantha has been busy keeping up with her work at the American Musical Theatre and Miso has been busy making various appearance around San Francisco and abroad. 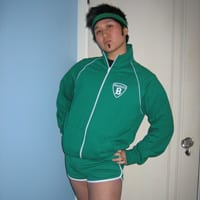 Charleston Chu is a fussy, Chinese American, drag fag who made his debut in the Bay Area as a member of The Fly Guys and The Transformers. He then pursued a solo career and performed in the drag and burlesque duo Eye Candy in New York, and now he’s thrilled to be back in fabulous San Francisco. In Charleston’s spare time, he likes to dress in drag as fiesty faux queen Charlotte Starlette. He is also a member of local hip-hop fusion dance company Freeplay Dance Crew. As a performer, Charleston strives to bring together progressive political consciousness, a celebration of genderfucking, fierce technical dance choreography, and a love for all things fabulous. And don’t forget, boys…Charleston’s a top. 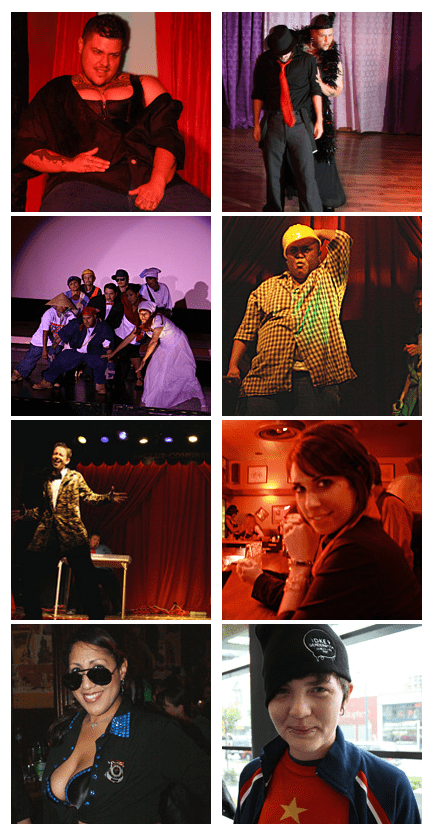 Founded in 2002, Boys R Us is Tucson’s Premier gender performance troupe. We are a collective of gender queers coming together to create a rollercoaster ride of emotion, imagery, ideas and entertainment. Exploring varying perspectives of gender bending, including identity, exploring the ying and yang of gender and societal roles, image, self-esteem, self-projection and identification, Boys R Us pushes the envelope of gender transformation to confront underlying social issues. This validates the “struggle” and provides common ground to communicate ideas of breaking through society’s dichotomous roles and questioning preconceived notions surrounding gender. Expanding peoples’ minds about what gender is, is not, and what it could be; masculine, feminine and everything in between, Boys R Us is gender bending at its finest. 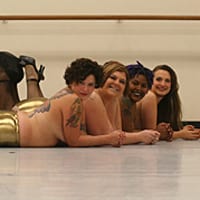 Composed of current and former members of Burlesque-Esque, the Queen Bees, the Transformers, Nappy Grooves, ButchBallet, Hogwarts Express and ButchTap, the four hotties of Titland bring a wealth of dance, burlesque and drag experience to the table.  They aim to thrill, tease, turn-on, tame and titilate their audiences through their unique style of tapping and twirling.  It’s T’n’T all the way with these gals, so get ready to explode with excitement for Starr69, Kentucky Fried Woman, Savory Sweet & Nefarious Vulvaline as they take you to an oasis known as Titland!

Micia Mosely
From doing drag in front of the mirror as a child, to performing improv comedy, to telling grown folks jokes all over the country, Micia Mosely has been an entertainer her whole life. She fuses a unique blend of hipness, humor, political astuteness, and versatility in all of her performances. Micia’s desire to surpass the boundaries of the ordinary led to her create “Sistahfriends: A Black Lesbian Puppet Experience” and to co-found Nappy Grooves, an all-Black drag king troupe. During the past 10 years, she has displayed her perfect comedic timing through stand up and as an emcee for numerous events throughout the nation. In May of 2006, Micia joined forces with Nursha Project and debuted her one-woman show, “Where My Girls At?: A Comedic Look at Black Lesbians .” She is currently performing stand up comedy and acting with Winceyco Entertainment group. In addition to her accomplishments as a performer, Micia also holds a Ph.D. in education, from U.C. Berkeley and leads school reform efforts across the country.