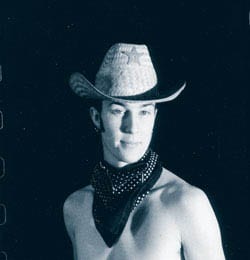 Fresh Meat in the Gallery
Fresh Meat in the Gallery is a mixed media smorgasbord of visual art exploring the transgender experience. Curated by Fresh Meat Productions, the exhibition features local genderqueer, transgender and queer visual artists’ journeys through the gender galaxy. Come view the gender-bustin’, the binary-defying, the body-modifying, and the history-making with love, sex, and politics thrown in for good measure. Come meet the artists at a free Gala Reception – after the show, opening night of Fresh Meat 2004.

Fresh Meat in the Gallery creates a visual dialogue about gender, the body and society. It is a conversation with and about subjects often left unseen or undiscussed, both within the queer community and society at large. Featured artist and genderqueer printmaker Emmett Ramstad says, “This artwork is about me, my community, changing bodies, my body.”

Fresh Meat is one of the nation’s largest and most acclaimed transgender/queer arts events – these shows sell out, so get your tickets early!

PICK UP THE MIC – Film

FOLLOW US!
Spouses For Life Sor Juana
Scroll to top