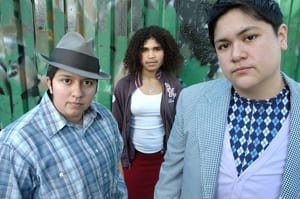 Through mixing, culture can be a casualty and a product of war, colonization and diaspora. Using performance and spoken word we will investigate the intersections of race, culture, assimilation, reclamation and colonization as we assert our queer mixed bodies to be powerful and indivisible sites of resistance. Featuring performances by Kirya Traber, Nico Dacumos and Luna Maia.

Media Art by Jillian Soto and TBA.
Backdrop by Gronk and Luna Maia

Nico Dacumos teaches high school in Oakland and performs and writes in his spare time. In 2007 he performed three shows for NQAF: “Representaciòn,” “Why Are Faggots So Afraid of Faggots, and “Transforming Community.” He has performed at San Francisco PRIDE, City Lights Books, and Highways Performance Space in Los Angeles. Nico also develops workshops exploring race and sexuality. Workshops have been presented for UC Davis, Mount Holyoke and Smith Colleges, Sistersong, Georgians for Choice, and Femme Conference 2006. His written work appears in the anthology Nobody Passes: Rejecting the Rules of Gender and Conformity. Stalk him at http://nicoelrico.blogspot.com.

Kirya Traber is not a political poet, but an activist sustained by poetry. In 2004 she became a National Teen Poetry Slam Champion and has since featured at Robert Redford’s Sundance Summit, the Bay Hip Hop Theatre Festival, the Living Word Festival, Michelle Tea’s RADAR Reading series, Peace Out: The International Homo Hop Festival, and in the book Tiny Little Maps to Each Other. In the fall of 2007 she stared in the lead role of the pulitzer prize nominated play Bullrusher. She works currently as a Poet Mentor with Youth Speaks. Follow her work on myspace.com/kiryatraber.

Luna Maia is a prolific, queer artist-innovator oriented towards issues of mixed heritage, feminism, and gender identity. She has produced chapbooks History of this Body: Bodies on Fire and Tortixa. She won an Honorable Mention for the Xochiquetzali Poetry Award, awarded to Latina and Native Women, for her poem A Love of the Ancestors. She has featured at Queer Open Mic, K’vetch, RADAR Reading Series, SF in Exile’s: Ink and Femina Poten’s Sizzle. This is her third year featuring in the National Queer Arts Festival and her second curatorial effort for the festival. Learn more at www.lunamaia.com

We will also be featuring some media art by:

Jillian Soto received her BA from San Francisco State University. She produces multi-media installations addressing the junction of gender identity and Chicano culture as well as the battle over Mexican immigration. She believes borders should be crossed both literally and figuratively. Soto lives and works in San Francisco.

Termino Medio refers to the idea of a middle ground or compromise. This short film is about unearthing an ethnic history. It is about trying to find the truth in that history and discarding falsehoods, meanwhile retaining a cohesive present identity.

Backdrop by Gronk and Luna Maia

Gronk is a painter, printmaker, muralist and performance artist. He was a founding member of ASCO, a multi-media arts collective in the 1970s.  Gronk has been commissioned to paint elaborate stage designs for organizations such as the Los Angeles Opera and Santa Fe Opera.  In 2006 Gronk’s paintings were featured in the De Young Museum’s Chicano Visions Exhibit curated by Cheech Marin.  His work relates to the direct visual aesthetic of German Expressionist Max Beckman and the cartoon-like style of American Phillip Guston, along with vernacular arts of Pre-Columbian civilizations. Check out his new Biography Gronk written by Max Benavidez.