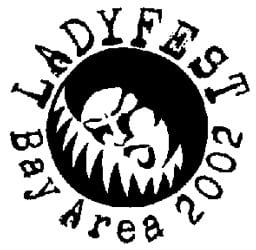 This benefit for Ladyfest Bay Area 2002 begins with a screening of Charm, the debut full-length feature film by underground filmmakers Sarah Reed and Sadie Shaw. Charm is a surreal film, its roots in the horror genre, about Rosie, who lashes out in an attempt to register some kind of reaction from the world around her. Ladyfest Bay Area (July 24-28) will feature women artists from all over the country to create conversation, interrogate boundaries, and forge bridges across class, race, culture, gender, sexuality, and genres. Ladyfest features music, visual arts, film/video, performance, and community-building workshops that will bring women and trans-identified people from all over the nation to showcase the artistic, organizational, and political achievements of women.