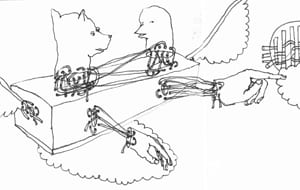 To be queer is to know our culture is haunted by the fear of different bodies.  What does it mean when our bodies come to represent otherness within our own community?  How do we learn new modes of assemblage from illness and disability as artists, writers, lovers, and activists?  How can we define health outside of medical discourse?  How do we keep each other healthy without giving in to segregation or the fear of contagion?  How does this frame other forms of marginality across lines of race, class, and gender?  How do illness and disability destabilize our fixed notions of the body, and how does this impact queer sexuality?  How do our margins expose the illusory boundaries between self and other?

D. A. Powell is the author of Tea, Lunch and Cocktails. The latter was a finalist for the Lambda
and the National Book Critics’ Circle Awards. Powell’s honors have included fellowships from the National Endowment for the Arts and the James Michener Foundation, a Pushcart Prize, the Lyric Poetry Award from the Poetry Society of America and an Academy of American Poets Prize. He teaches in the English Department at University of San Francisco.

Toni Mirosevich’s first collection of nonfiction, ‘Pink Harvest: Tales of Happenstance,” received the First Series of Nonfiction Award from Mid-List Press. She is the author of three previous collections of poetry, including, ‘Queer Street,’ and ‘My Oblique Strategies,’ winner of the Frank O’Hara Chapbook Award. Fellowships and awards include residencies with the MacDowell Colony, Djerassi Resident Artists Program, the Willard R. Espy Foundation, Pushcart and Lambda Literary Award nominations in Poetry, and the Astraea Foundation Emerging Lesbian Writer in Fiction Award. She is a Professor of Creative Writing at San Francisco State University and former Associate Director of the Poetry Center and American Poetry Archives.

Oriana Bolden writes: My experience as a young queer woman of color, growing up staring poverty in the face & living w/ a chronic illness, shows me that we have little choice but to shout, sing, dance and create a different vision than that which we are forced to consume. Because I believe that communication is a Human Right, I use technology, art and community organizing to facilitate steps toward self-determination in oppressed communities worldwide, and in particular, in my own neighborhood. More information about my work, third cinema, and community media production can be found at www.reelchange.org.

Gregory Tomso is a professor of American Literature and Cultural Studies at the University of West Florida. His research focuses on the intersection of illness and sexuality in American culture. He has written about sexuality in relation to leprosy, the nineteenth-century illness neurasthenia and, most recently, HIV and AIDS.

Briana O’Higgins is a queer woman with a chronic illness and a graduate student in the Social Documentation Program at the University of California, Santa Cruz. She is working towards a master’s degree in Social Documentation using disability theory, queer theory and body politics to interrogate representation and the construction of bodies through the resurgence of the human oddity freak show in the United States. This thesis will be presented in audio documentary format. Aside from school, Briana likes to alternate between taking long runs and chain smoking cigarettes and works as a fill in host for Morning Edition and All Things Considered at KUSP public radio in Santa Cruz, CA.

“Sins Invalid: An Unshamed Claim to Beauty in the Face of Invisibility” is a performance project on disability and sexuality which incubates, showcases, and celebrates artists with disabilities, exploring the themes of sexuality, embodiment and the disabled body. Conceived and led by people with disabilities, it creates a space where disabled artists can develop and present provocative work where normative paradigms of embodiment are challenged, offering instead a vision of beauty and sexuality inclusive of all individuals and communities. Check out Sins Invalid @ the Brava Theater in September 08!”

Patricia Berne, Director of Sins Invalid, is a writer and filmmaker who has facilitated writing workshops for multiple communities, including youth, writers of mixed racial descent and survivors of sexual violence. Her participation in film projects includes the films Haiti: Harvest of Hope (1998), System Failure: Violence, Abuse and Neglect in the California Youth Authority (2004) and SINS (2008, post-production). Berne’s background includes community organizing within the Haitian diaspora and advocacy with incarcerated youth; most recently she directed the Project on Race, Disability and Eugenics at the Center for Genetics and Society. She currently chairs the Board of Directors at San Francisco Women Against Rape. Her academic work has focused on trauma and resilience for survivors of interpersonal and state-sponsored violence.

Lezlie Frye is a performance artist, activist, poet and scholar. She has performed at a wide range of artistic and cultural events, including festivals, workshops, and conferences. Frye aims to address intersecting forms of oppression and to locate critical resistance in the foxy bodies of cripples everywhere. She utilizes performance modes that fuse movement to storytelling and spoken word. Frye is currently a doctoral student in the American Studies Program, department of Social and Cultural Analysis, at New York University. Her academic work explores critical connections between dis/ability, race, sexuality, gender, and nation, with particular interest in art, aesthetics, and the politics of life and death.

Indira Allegra is a member of the artistic core of Sins Invalid, a re/view of embodiment for performers and video artists exploring intersections of sexuality and disability. She was the 2007 featured artist for the Eugene, Oregon poetry slam and has been published in Wordgathering: A Journal of Disability Poetry. Her work is concerned with emotional intimacy, the body as landscape, spirit and states of hyperawareness. She believes that the creative process can provide clarity from traumatic situations and retrieve what has been lost through violence. Indira is hard of hearing and lives with pstd and depression.

seeley quest has featured at the 2002 first international Queerness and Disability Conference, the 2003 national True Spirit Conference, the San Francisco Center’s opening week gala Some Kind of Queer, the 2003 Trannyfest, the 2002 and 2004 Bay Area Ladyfests, the ’05, ’06, and ’08 SF Anarchist Cafes, the 2007 SF Sex Worker Film and Arts Festival, Sins Invalid 2007 at Brava Theater, SF Bay Guardian ‘Best of the Bay’ event Writers With Drinks, 848 Community Space and Counterpulse, in residency at the Jon Sims Center, in the ‘Trans As Fuck’ shows sie’s also co-organized, L.A.’s Trans/Giving, on tour with the 2005 and 2006 Tranny Roadshows and elsewhere. Sie is excited to participate with Marginal Bodies.

Brent Armendinger is a poet whose work has appeared in many journals, including Cut Bank, Diagram, Fourteen Hills, Parthenon West Review, and Hayden’s Ferry Review. He has an MFA in Creative Writing from the University of Michigan, where he received a Hopwood Award in Poetry. His collaborative projects include performance with Anne Carson, visual art with Ben Fife, queer scholarship with David Halperin, and music with the band Sissy Spaceship. He has taught literature and creative writing in rooms as varied as cafeterias in juvenile hall to senior centers to college classrooms. He curated (Un)Touchability: HIV and the Queer Community on World AIDS Day in 2007 in San Francisco. He rings up groceries at Rainbow, a worker-owned collective. In the fall of 2008, he will begin an appointment as Professor of English and World Literature at Pitzer College in Claremont, CA.