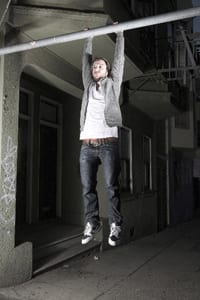 Home-Made Super Hero is a three-sectioninterdisciplinary hip-hop performance combining music, spoken word, solo performance, dance, percussion and film. This suite of three autobiographical interdisciplinary hip-hop compositions challenges the homophobic and misogynist values of traditional rap as well as mainstream media imagery of transgendered peoples’ lives.  This piece explores the social marginalization, the political oppression and the random violence transgender people face and draw a parallel between the double life of a super hero to the experience of a transperson. At the same time, the piece affirms the positive nature of the transgender experience and of our struggles to construct our identities in positive terms. Those who succeed are Home-made Super Heroes.

Katastrophe aka rocco kayiatos composed the music and will be accompanied by dancer Vanesa Camara, filmmaker Jed Bell and other live instrumentation.

Film and animation by Jed Bell

Jed Rosenthal Bell is a filmmaker who started out as a community organizer for ACT UP and queer civil rights campaigns, learning graphic design along the way by making posters and flyers, protest signs and newsletters. Jed wound up combining the collaborative skills of activism with the visual storytelling of graphic design to start making films. His first short, the queer noir crime drama “Foucault WHO?,” has toured the globe, winning “best of fest” awards in the U.S. and Europe. His kvetchy animated trans satire “DRIVE THRU” is still making its way around the world after winning “Best Animation” at San Francisco’s Rough Cut Film Festival.

Vanesa Camara is a dancer, choreographer and teacher who lives in Hollywood and specializes in Classical Ballet, Contemporary and Lyrical Jazz.  She retired from dance fifteen years ago out of fear of rejection when she began her transition but resumed her career last year. Camara wants young trans people to know that there is a place for them in any field they choose. Her greatest role models are Rudolf Nureyev because he continued to dance even after his youth was gone and his body was being destroyed by the AIDS virus and Alicia Alonso who continued to dance on stage until she was almost 80 years old and totally blind.

Rocco “Katastrophe” Kayiatos is a seasoned vet on the mic. He is a genre-busting emo-hop MC whose stunning lyrical skills merge with beats that slide from slick to raw to solid to eccentric.  His music creates a sonic otherworld that snags you in a dance-trance while teasing your head with rhymes that snap, pop and educate.  Katastrophe’s MC delivery veers from clever machine gun rat-a-tat to hypnotic emotional rhythm.  He was crowned Producer of the Year by Out Music Awards, for his début album Let’s Fuck, Then Talk About My Problems and since released Fault, Lies and Faultlines.  He is a feature in the documentaries films Poetic License, and Pick up the Mic.   His music has been a part of the soundtrack of several short films and Showtime Networks The L Word.  Kayiatos is the subject of a forthcoming biopic called The State of Katastrophe. He is poised to release his third and best cd yet, The Worst Amazing.

FOLLOW US!
think Philosophy Coming Out Again
Scroll to top