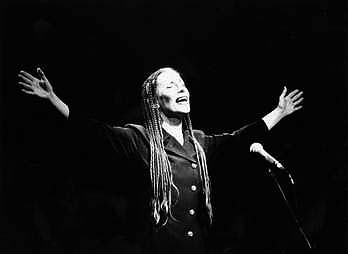 Join us for an evening lecture/demo and question and answer session with composer, singer, filmmaker, choreographer, and director MEREDITH MONK. A pioneer in what is now called extended vocal technique and interdisciplinary performance, she is a fourth-generation singer. Since graduating from Sarah Lawrence College in 1964, she has created more than 100 works. During a career that spans more than 30 years, she has been acclaimed by audiences and critics as a major creative force in the performing arts.

Monk’s contributions to the cultural landscape were recognized with the MacArthur Genius Award in 1995. This achievement was followed by a retrospective exhibition, Meredith Monk: Archeology of an Artist, at the New York Public Library for the Performing Arts at Lincoln Center in 1996; a major installation, Art Performs Life at the Walker Art Center; and a show, “Shrines” at the Frederieke Taylor/TZ Art Gallery, inclusive in the Whitney Museum Century of American Art.

Monk has received numerous awards throughout her career, including two Guggenheim Fellowships, a Brandeis Creative Arts Award, three Obies (including an award for Sustained Achievement), two Villager Awards, a Bessie for Sustained Creative Achievement, and the 1986 National Music Award. She holds honorary Doctor of Arts degrees from Bard College, the University of the Arts, the Juilliard School, and San Francisco Art Institute. Her recordings Dolmen Music (ECM New Series) and Our Lady of Late: The Vanguard Tapes (Wergo) were honored with the German Critics Prize for Best Record in 1981 and 1986. Her music has been heard in numerous films, including La Nouvelle Vague, by Jean-Luc Godard, and The Big Lebowski, by Joel and Ethan Coen.

Meredith Monk and Vocal Ensemble recently completed a domestic tour of A Celebration Service, a nonsectarian worship service, commissioned by the American Guild of Organists and Union Theological Seminary, that melds her haunting vocal music and movement with spiritual texts drawn from two millennia. In October 1999 Monk performed a Vocal Offering for His Holiness, the Dalai Lama, as part of the World Festival of Sacred Music in Los Angeles. Additionally, a monograph, Meredith Monk (edited by Deborah Jowitt) was recently released by Johns Hopkins Press.