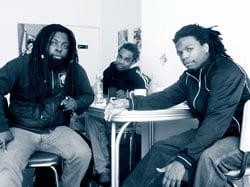 OAKLAND, CA. The East Bay holds down Pride Weekend with Youth Speaks 6th Annual Queeriosity celebrating writing & performance from LGBTQ youth from throughout the Bay Area. This year’s event is presented as part of the National Queer Arts Festival (www.nqaf.org) in association with the Sexual Minority Alliance of Alameda County. Queeriosity will take place on Friday June 25th as a kick-off to Pride Weekend at the SMAAC Youth Center, 1608 Webster Street, in downtown Oakland 6pm-10pm. The event is free and open to the public and we invite LGBTQ Youth from the Bay Area to participate in this celebration of the LGBTQ youth voice, all night open mic slots and featured artists JenRO, Katastrophe, Loco Bloco and Def Poet ButtaFly Soul. Hosted by Juba and Tim’m of DeepDikCollective, the 6th Annual Queeriosity will feature special performances by youth poets from the Annual Youth Speaks Teen Poetry Slam and Bay Area Team members to Brave New Voices (Inter) National Youth Poetry Slam.

The popular Youth Speaks (http://www.youthspeaks.org) event is made possible in part by the National Queer Arts Festival, the Queer Cultural Center and the Yahoo Foundation. This year we are co-presenting Queeriosity with the Sexual Minority Alliance of Alameda County (SMAAC), a nominee for the organization Grand Marshal for the San Francisco Pride Celebration 2004 for their outstanding service to LGBTQ youth throughout the Bay Area. Admission is Free and open to all ages. To sign up for the youth open mic slots ; sign up starts at the SMAAC Youth Center at 6:00pm. The event expects to draw an audience of over 250 and features Community Tabling by LGBTQ organizations from all over the Bay Area.

About Youth Speaks and SMAAC

Founded in 1996, Youth Speaks is the premier nonprofit presenter of spoken word in the country, producing multiple artistic forums, such as the Living Word Festival, Second Sundays, Youth Speaks Teen Poetry Slam, Brave New Voices, Poetic License and the Bringing the Noise Reading Series. Equally key to Youth Speaks’ mission is its comprehensive curricula of arts education and youth development programs, such as free after-school and in-class writing workshops, and school assemblies. Based in San Francisco, Youth Speaks has reached thousands of youth in the Bay Area alone. For more information visit http://www.youthspeaks.org or call 415-255-9035.

The Sexual Minority Alliance of Alameda County Youth Center (“SMAAC”) is a five-year-old, nonprofit 501(c)(3) agency located in Downtown Oakland, California. They are the only East Bay agency whose sole purpose is to serve lesbian, gay, bisexual, transgender and questioning youth ages 14 to 24 by providing educational and recreational opportunities in a drug and violence free environment. LGBTQ youth are often subject to harassment, ridicule and violence in their homes, neighborhoods and schools. We provide a safe space for youth who would otherwise have no such space in their lives. For more information visit www.smaac.org or call 510-834-9578.

ButtaFlySoul is a new Def Poetry Jam artist who will be the first black same gender loving poet representing on the HBO series (scheduled to air in September 2004). Based in NYC, it’s a special treat to have ButtaFlySoul in the area for the SF Pride Celebration. Over the past year he’s been directing shows for SpokenWorks, Baron and Nuyorican Poets Café. A poet, vocalist, actor and director, native of Chicago, ButtaFly Soul now makes his home in Harlem, USA. He was recently filmed for Def Poetry season 4, is the host of “FLOW” (an LGBTQ open Spoken Word/Hip Hop monthly) at Nuyorican Poets Cafe, and is currently directing “Downtown
Rhythm” at the off-Broadway theater Primary Stages.

Deep Dickollective (D/DC):The fag has entered and the cypher is stalled. The anti-gangster aesthetic of quasi-Nationalist “conscious” hip-hoppers and bohemian MC thrift shoppers pave a space for D/DC to articulate its word play. Juba Kalamka (pointfivefag), JB Rap (Jeree Brown), Tim’m T. West (25percenter), and Marcus Rene Van represent a political lyricism that does not take itself too seriously. They are the brave mavericks of a movement that some affectionately refer to as homo-hop. They are Oxymoronic “out” black queer Emcees the world says do not exist. They are the rumblings of a revolution that have for too long beensilenced. Overstand? It’s not that deep.

Katastrophe (AKA Rocco Kayiatos) is a hot-shit, somewhat reclusive, over analytical, FTM emo-hop MC who has rocked the mic, charmed the ladies and educated the masses across the USA. With his tongue-twisting rhyme style, political frankness and a disarming sense of humor, he has become a primary player in the growing national queer hip hop underground.

Katastrophe hit the scene in 1997 as a smart-mouthed, brainy and confrontational poet whose debut performance In San Francisco’s Luna Sea Theater had the audience gasping at his fierce teenage passion and impressive talent. His success on the Luna Sea stage led him to Youth Speaks, the San Francisco non-profit literary organization, then in it’s very first year. After winning the 1998 Youth Slam, he became a Youth Speaks teacher and mentor, as well as their star performer. Visiting over 50 Bay Area middle schools, and high schools, delivering poems and workshopping student poetry, Kayiatos helped lay the foundation for this successful literary program. He continued to slam and wow audiences with his poetry, which lead to him becoming a featured artist in the critically acclaimed documentary Poetic Licensee, which debuted nationally on PBS Fall 2000. Look out for Katastrophe’s soon to be released LP “Let’s F*ck, Then Talk About My Problems”, and the music video for the single “Hella Hoes.” His writing occasional appears in publications such as YO! (Youth Outlook) magazine, the San Francisco Chronicle, and the San Francisco Bay Guardian. He is a contributor to an upcoming anthology of writings on the FTM experience, to be published by ManicDPress.
www.katastropherap.com

You can catch her on stage in your city! JenRO has been rockin’ tha mic since tha age of ten! Born n raised in tha Bay California, JenRO is currently working on her demo album entitiled “The Revelation” put out by Unknown Muzic Entertainment and Tact Out Muzic Entertainment. “The Revelation” featuring Mr.Kee, C-lim, Goldie Loc(Snoop’s Eastsidaz), Spice 1,Tupac’s Outlawz and more. JenRO has also been featured on compilations such as, “Down 4 Tha Swerve”, “Bart 2 91 siccness”, and “Freaks come Out” also on Cucizy’s album “Wordz of Wizdom”.

Lady Tragik has performed all over the Bay Area as well as nationally, including Washington D.C. for Capital City Records, and performed at the Bring in Da Slam national poetry event in D.C. against well-known writers such as Nikki Giovanni, Ray Suarez, and Ed Hirsch. She won in 2003 in San Francisco’s WritersCorps Poetry Slam League. She’s performed with Youth Speaks and appears on their new Bringing the Noise 3 release, and has recorded with Instant Hits Entertainment out of San Francisco. She was also a part of a recently released Spoken Word compilation titled ‘Sista Says’ She currently works with United Playaz and Proyecto Contra SIDA Por Vida.

Loco Bloco is a performing arts program for children, teens and young adults rooted in the multi-ethnic Mission District of San Francisco. Founded in 1994 by artists and activists of color, Loco Bloco has provided thousands of youth from low-income communities free classes in percussion, dance and theater. Drawing from African, Latino and indigenous cultural currents, they empower youth of color by connecting them to art forms reflective of their cultural heritage.

This event is made possible by the generous support of the Yahoo Foundation, the Queer Cultural Center and the National Queer Arts Festival.