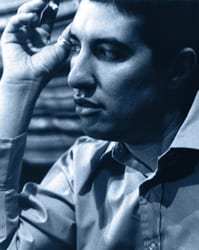 Reception and staged reading of a new play by Ricardo Bracho, an adaptation of Jean Genet’s novel and Rainer Werner Fassbinder’s film, Querelle. Bracho is the recipient of a George Houston Bass Award, a Panelist’s Choice Award from the Edward Albee Theatre Festival in Valdez, Alaska, and a Dean Goodman Choice Award for Outstanding Playwriting. Querido was commissioned by The Latino Theatre Initiative of the Mark Taper Forum, and is co-produced by QueLACo (Queer Latino/ Artists Coalition), Qcc and The Center.

Ricardo A. Bracho is a writer who was born in Mexico City, raised in Los Angeles, spent over a decade in the Bay Area and now resides in New York. As a playwright he has been produced in both San Francisco, at Brava Theater Center and Theatre Rhinoceros, and in New York at INTAR Hispanic American Arts Center. His plays have been staged read at SF’s Intersection for the Arts, LA’s Plaza de la Raza and at Brown University’s Rites & Reasons Theater. He was a participant in the NEA/TCG Residency Program for Playwrights and a recipient of an Artists-in-Communities Grant from the Creative Work Fund of the Walter & Elise Haas Fund. He has taught theatre and creative writing with the community-based programs the DramaDIVAS and Proyecto ContraSIDA Por Vida and in Chicano Studies, African American Studies and Ethnic Studies at UC Berkeley and in the Spanish & Portuguese Department at Stanford University. He has co-produced and written short videos and worked as an art director on independent films that have shown internationally and was the recipient of a George Houston Bass Award, a Panelist’s Choice Award from the Edward Albee Theatre Festival in Valdez, Alaska, and a Dean Goodman Choice Award for Outstanding Playwriting.