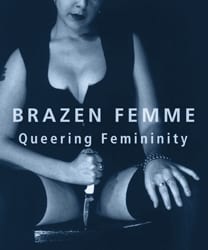 From Canada! Brazen Femme: Queering Femininity is a manifesto for the unrepentant bitch, straddling the furious and fantastic. Undeniably celebratory and deeply troubling, this sharp-edged collection of fiction, prose poetry, personal essay, photographs, and illustration reveals the un-hyphenated femme experience emerging in performance, betrayal, violence, humor, and survival. Brazen Femme recognizes femme as an identity in flux and in motion, as constantly being reinvented. The collection includes the entertaining and challenging work of writers and artists whose stories are missing from existing explorations of femme that exclude experiences of men, transsexual women, and sex workers. Whether by choice or necessity, these frenzied femmes explore their desires to make (and remake) femininity fit their own queer frames. Darlings, drag queens, whores, and action heroes…a femme by any other name is spectacular. Brazen Femme has been nominated for a Lambda Award.

Chloë Brushwood Rose is a photographer, writer, and academic whose work has appeared in several publications, including the Review of Education/Pedagogy/Cultural Studies and Gender and Education. Chloë is a co-editor of the Lambda nominated collection Brazen Femme: Queering Femininity and has a series of fifteen photographs published in the award-winning Boys Like Her: Transfictions. She is a member of the Stern Writing Mistresses and the Public Access art collective and editorial board. Chloë is currently completing her doctorate in Language, Culture, and Teaching at York University in Toronto.

Anna Camilleri is a writer, performance poet, curator, and producer living in Toronto. Camilleri is a co-editor of the Lambda nominated Brazen Femme: Queering Femininity and was the co-founder and co-director of Taste This, which toured extensively with three full-length performance works and collaborated to publish Boys Like Her: Transfictions to critical and popular acclaim. Camilleri has performed nationally and internationally for nearly a decade, is a visiting columnist with Xtra!, and is a member of SOCAN (Society of Composers, Authors and Music Publishers of Canada). Currently, Anna is writing a novel and a play.

Michelle Tea is the author of three wicked femmy books—-The Passionate Mistakes and Intricate Corruption of One Girl in America, Valencia, and The Chelsea Whistle. She got a Lambda and a SF Bay Goldie award for Valencia and is presently nominated for a Lambda for The Chelsea Whistle. In 1994 she co-founded the weekly all-girl open mic Sister Spit, which later morphed into the infamous national tour. She continues to both curate events around town and drag performers around the country, and this year she was honored to be included on the first ever Sex Workers Art Show Tour.