Riot grrrl was a youth and punk-oriented radical sociopolitical movement that captivated the hearts, minds, raging hormones, and feminist rage of many queer and trans teen girls in the early and mid-nineties. Join the National Queer Arts Festival and San Francisco in Exile for a Riot Grrrl Revival — where you can once again dress in your leopard print thrift store finery, scrawl SLUT across your midriff, toss that Huggy Bear 7″ on the turntable, and make a fanzine extolling the virtues of veganism + vibrators. It’s Revolution Grrrl-Style, Now! — with tongue firmly planted in cheek. Past and present zinestars and grrrl revolutionaries will tell wax nostalgic about the old days, and let you know what they’ve been up to recently. Zines and cupcakes will be available for purchase.

Gina de Vries is a queer femme writer, rabble-rouser, sex worker, pervert, and Paisan. She grew up in San Francisco, where she cut her activist and artist teeth on the riot grrrl and queer arts movements in the 1990s. Her fiction, journalism, memoir, and smut have appeared dozens of places, including: Baby, Remember My Name: An Anthology of New Queer Girl Writing, Dirty Girls, TransForming Community, That’s Revolting!: Queer Strategies for Resisting Assimilation, Bound to Struggle: Where Kink & Radical Politics Meet, Femmethology, $pread magazine, make/shift magazine, and Curve magazine (where she was a columnist from 1997-2004). Currently, Gina curates shows for long-running queer performance series San Francisco in Exile, blogs for national LGBT blog Bilerico, and teaches a writing workshop for sex workers at San Francisco’s Center for Sex & Culture (where she also serves on the Advisory Board). She can be cruised online at ginadevries.com.

Chan Dynasty is the performance art/drag/burlesque persona of Celeste Chan. She also performs under the name Lady Fantastique, promoting interdisciplinary art and the sexiness of feminism (www.myspace.com/lfantastique). Ms. Chan brings subversive glamour and political commentary to the stage as a solo act and in the duo, Hapa Hardcore. She has performed most recently on the stages of: Deep Lez (National Queer Arts Festival), Rebel Grrl (SF in Exile), APATURE festival, Cabaret de Nude, and the Kraftabilly Fair. Her video art has screened at the Olympia Film Festival, Mangos with Chili WHIPPED show, Risky/Risque presented by Shifting Narratives, and her newest short will screen at the 2009 QWOCMAP film festival. 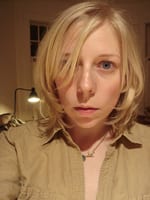 Photo by by Melissa Gira Grant

Melissa Gira Grant is a writer, educator, and artist working in sex & technology. She is the co-founder of Boffery, an online tool for organizing and discussing one’s sex life with trusted personal contacts. She writes about sex & the internet at her award-winning blog, Sexerati. Her work has appeared in print in $pread, Make:, and in the anthologies Best Sex Writing 2008 (Cleis Press) and Dirty Girls (Seal Press). An early sex blogger and one of the last remaining webcam girls, she has been writing about sex on the web since 1998. From 2002 to 2005, she operated Sacredwhore.org, one of a handful of blogs written by sex workers to gain wider attention, including her podcast, Whorecast, which in 2005 occupied the highest-ranking spots for a Political, Religious, Sexuality, and Business podcast in the iTunes Music Store. In 2005, she launched the award-winning Sexerati. At the height of the “DC Madam” prostitution scandal in 2007, she and the Desiree Alliance founded the sex worker group blog Bound, Not Gagged, recognized as one of the best sources of coverage on former New York Governor Eliot Spitzer’s relations with high-priced escorts hired over the internet. In 2008, she reported daily on sex and the internet for Valleywag. Melissa has been a consultant with the Soros Foundation’s Sexual Health and Rights’ Project and the St. James Infirmary on using blogging, podcasting, videoblogging, and online social networks for advocacy and movement building among sex workers. She has also written a sex education curriculum for teenagers on MySpace, as part of a National Institute for Health funded study, for the Internet Sex Information Service. She has presented her work on sexual health, human rights, and new media at the 2008 International AIDS Conference in Mexico City, the Third Wave Feminist Foundation, the University of San Francisco, the Institute for the Advanced Study of Human Sexuality, the Center for Sex and Culture, the New School for Social Research, and the UC Berkeley Labor Center.

Liz Henry lives in many intersecting communities, as a feminist, poet, blogger, science fiction fan, queer & genderqueer writer, and computer geek. In the 90s, she published the SCUM Manifesto, the Bitch Manifesto, and the Slut Manifesto as zines.  She is a proud member of the Secret Feminist Cabal.

Nomy Lamm is a writer, musician and activist whose work has been featured in magazines (including Ms., Punk Planet, and Make/Shift), anthologies (including Listen Up: Voices from the Next Feminist Generation, Word Warriors: 35 Women Leaders in the Spoken Word Revolution and Working Sex: Sex Workers Write about A Changing Industry, all on Seal Press), and onstage in theaters, universities and nightclubs all over the US. She has toured with Sister Spit (1999), the Sex Workers Art Show (2005), and Dr. Frockrocket’s Menagerie and Medicine Show (2001). She has released two solo albums (Anthem, 1999 on Talent Show, and Effigy, 2002 on Yoyo Recordings) and co-wrote, co-produced and performed in “The Transfused”, a post-apocalyptic rock opera about multi-gendered animal-human hybrids, in 2000. Her most recent publication is a piece of erotic fiction in the new anthology Fist of the Spiderwoman: Tales of Fear and Queer Desire, edited by Amber Dawn on Arsenal Press.  She teaches voice lessons, and is currently working on her first novel, The Best Part Comes After the End.

Zuleikha Mahmood is a queer mixed Afghan American writer who lives in  Oakland. In 2008, she toured with Mangos with Chili, a queer and trans  people of color performing arts cabaret. Zuleikha is committed to documenting the lives of Muslim drop-outs, fuck-ups, queers, and
whores. She’s a proud co-founder of The Femme Sharks.

FOLLOW US!
Into the Streets! QWOCMAP
Scroll to top