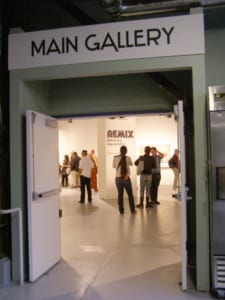 ReMix: ReFraming Appropriation mines 15 years of National Queer Arts Festival exhibitions towards understanding the centrality of the act of appropriation for queer art of the recent past.  Using appropriation as its lens, it sifts through all the art exhibited over the last 15 years, selecting those works for redisplay that map the parameters of queer appropriation as it has evolved through to today. Curated by Jonathan D. Katz, former Board Member and one of the first curators of the National Queer Arts Festival, ReMix: ReFraming Appropriation in essence appropriates years of appropriations in order to both articulate and enact how queer politics so often turns on making familiar images and ideas ventriloquize new politics, new identities, and new utopias.

Jonathan David Katz is an American activist, art historian, educator and writer, he is currently the director of the doctoral program in Visual culture studies at State University of New York at Buffalo. [1] He is also the former executive coordinator of the Larry Kramer Initiative for Lesbian and Gay Studies at Yale University.He is a former chair of the Department of Lesbian and Gay studies at the City College of San Francisco, and was the first tenured faculty in gay and lesbian studies in the United States.Katz was an associate professor in the Art History Department at the State University of New York at Stony Brook, where he also taught queer studies.He received his Ph.D. from Northwestern University in 1996.

His forthcoming book, The Homosexualization of American Art: Jasper Johns, Robert Rauschenberg and the Collective Closet, will be published by the University of Chicago Press.An internationally recognized expert in queer postwar American art, Katz has recently published “Jasper Johns’ Alley Oop: On Comic Strips and Camouflage” in Schwule Bildwelten im 20. Jahrhundert, edited by Thomas Roeske, and “The Silent Camp: Queer Resistance and the Rise of Pop Art,” in Plop! Goes the World, edited by Serge Guilbaut. Katz is currently co-curator with David C. Ward and Jenn Sichel of the exhibition “Hide/Seek: Difference and Desire in American Portraiture” at the National Portrait Gallery, the first major museum exploration of the impact of same-sex desire in the creation of modern American portraiture. David Wojnarowicz’s video “A Fire in My Belly” was removed from the exhibition on November 30, causing controversy. Katz was not consulted before the work’s removal.

The mission of SOMArts is to promote and nurture art on the community level and foster an appreciation of and respect for all cultures. To find out about SOMArts classes, events and exhibitions, please visit www.somarts.org.”

REMIX was funded by The Zellerbach Family Fund and the San Francisco Arts Commission.