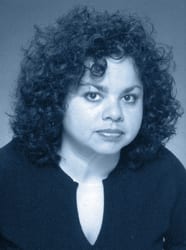 Please join co-librettists Carla Lucero and Alicia Gaspar de Alba for a sneak preview and discussion of their opera in progress, The Sor Juana Project. Composed by Carla Lucero, the opera is based on Gaspar de Alba’s historical novel, Sor Juana’s Second Dream. Known as Mexico’s Tenth Muse and the first great Latin American poet, Sor Juana Inez de la Cruz was also a philosopher, playwright, feminist and Catholic nun, who rocked the church and the literary world with her quill in 17th Century New Spain. Her secular writings, which included romantic love poetry to another woman, la Condesa de Paredes, were banned in her native country. This event is co-produced by QueLACo (Queer Latino/a Artists Coalition) and Qcc.

Carla Lucero is originally from Los Angeles, has made her home in the Bay Area since 1997. In June, 2001, Lucero’s first full-scale opera, Wuornos premiered at the Yerba Buena Center for the Arts in San Francisco. Shortly afterwards, she was commissioned by the late Patricia Hennings to write a choral work for the Skyline College Choir. Lucero’s compositions have been written for a wide spectrum of projects. Before moving to the Bay Area, she worked extensively with the Los Angeles-based Collage Dance Theater, writing the original scores for Liquid Assets, Most Wanted (presented in a city jail), La Brea Woman, Life in the Lap Lane, and Out of Circulation. In 1998 Lucero won Los Angele’ ’Lester Horton Outstanding Composition in a Dance Performance for her work in Most Wanted. She has also written film and video scores for Cineplay International, Action International Pictures and HBO. Her composition in Never Come Back, a film by Tamar Halpern, directed by Patrick Yu, was featured at the 1996 Directors Guild of America. Lucero has received grants, awards and commissions for her work from Meet the Composer, California Arts Council, San Francisco Arts Commission, Creative Work Fund, Zellerbach Family Fund, Astraea Foundation and Open Meadows Foundation. In December 2001 and January 2002, she was honored with the awards of “Best of Stage” and the ten best in music from the “OUT 100 Success Stories of 2001” in The Advocate and OUT magazines for Wuornos. Currently, Lucero is composing her second opera based on the historical novel, Sor Juana’s Second Dream, by Alicia Gaspar de Alba. She and the author are now in the stages of co-writing the libretto

Alicia Gaspar de Alba is a native of the El Paso/Juárez border, and recognizes herself as “the first Chicana fruit of her family.” She holds a Ph.D. in American Studies from the University of New Mexico (1994) and is an Associate Professor of Chicana/Chicano Studies at UCLA, where she teaches courses in Chicana lesbian literature, border consciousness, barrio popular culture, Chicano/Latino exhibitions, and Chicana feminism. She also serves as Associate Director of the Chicano Studies Research Center She is the author of a historical novel, Sor Juana’s Second Dream and an academic book, Chicano Art Inside/Outside the Master’s House: Cultural Politics and the CARA Exhibition. The novel received First Place in Historical Fiction in The 2000 Latino Literary Hall of Fame Book Awards, and was translated into Spanish and German. Her full-length collection of poems, “Beggar on the Córdoba Bridge,” and her first collection of short stories, The Mystery of Survival were awarded the first Rudolfo and Patricia Anaya “Premio Aztlán” in 1994. Her writing has been anthologized in several publications, and has also been published in French, German, and Mexican anthologies of Chicano/a literature. Her second collection of poetry is forthcoming from Arte Público Press in 2003, and her first edited volume, Velvet Barrios: Popular Culture & Chicana/o Sexualities has just been released by Palgrave/Macmillan. She has recently completed a novel on the murdered women of Juárez.