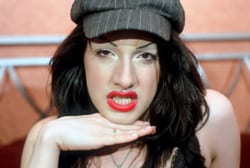 Radar Productions is psyched to co-present the debut of East Coast–by way of Appalachia–genderqueer performance artist Ben McCoy’s solo performance extravaganza. Providing a manic-depressive glimpse into the surreal, yet VERY real (one might even say ‘Mighty Real,’) perspective of one boy-who-looks-like-a-girl, Ben McCoy.Join Ben on a roller-coaster of emotion, as our tragic diva mistakes hot male hustlers for God, battles fantasies of capitalist grandeur, explores past lives set in the Prohibition-era Speakeasy of NYC and creates an unsettling portrait of the sexual war between “str8,” men and…the rest of us.Critiquing the arts community, the queer community, assimilation,  fashion, and even Craigslist, this show raises a well-manicured middle finger to all. Included in the show are the two short films The Face of God and It’s Too Late, by the international filmmaker Peter Pizzi. With special guests: Kirk Read, Shar Rednour and Juba Kalamka on June 18; Len Plass and Samara Halperin on June 19.

Kirk Read
Kirk Read is the author of “How I Learned to Snap” and the forthcoming essay collection “This is the Thing.” He curates events around town and cohosts the open mics series K’vetsh and Smack Dab. He recently completed his MFA at San Francisco State in “fiction,” although most of what he wrote is completely true. He has worn many hats at St. James Infirmary, the city’s free clinic for sex workers. He is working on a novel as well as two anthologies – a male sex worker book and a collection about the intersections between gay male and transmale communities. His out-of-date website is kirkread.com

Samara Halperin
Samara Halperin is a filmmaker and writer whose movies have been making audiences laugh, cry and scream in screenings from Australia to Saskatchewan, since 1989. Samara is from New York City and currently lives in Oakland, California, where she makes movies, teaches film and video making and admires palm trees. Samara is currently working on “Times Square Tumbleweed,” the sequel to her animated film, “Tumbleweed Town.”

Shar Rednour
Shar Rednour authored The Femme’s Guide to the Universe. She always approaches life with feminist question marks, yet she was of course born in pumps. She produced/directed/created some legendary flicks including the life-altering Healing Sex: A Mind/Body Approach to Healing Sexual Trauma (www.healingsexthemovie.com) She moved closer to earth exactly 3 inches to mommy her  fabulous boys–that is to say she’s wearing 3 inch wedgies instead of 6 inch stillettos.

FOLLOW US!
Down & Dirty For Lack of a Better Word
Scroll to top