This exhibit showcases Athletic Model Guild’s output from 1968 through 1972.  After the interpretation of laws regarding male frontal nudity were revised, AMG’s work provided the bridge between earlier non-nude physique films and the full hardcore films which found their way into adult theaters a few years later.  L.A.’s Park Theatre became a haven for AMG films, and each weekend a new batch would feature there.  The month-long exhibit includes vintage posters from Park Theatre, AMG movie scripts, rarely seen movie stills, as well as other ephemera. The exhibit is accompanied by a fundraiser/screening of rare hardcore AMG films at Center for Sex & Culture – an adults only event.

Proceeds from this fundraiser will go directly to the Bob Mizer Foundation to help offset the cost of material used to archive the collection and preserve the films.

Curated by Dennis Bell – the current proprietor of the AMG estate and brand. The Athletic Model Guild was founded in 1945 by photographer-filmmaker-publisher Bob Mizer and over the years has been the primary vehicle of expression for Mizer’s photography and films – as well as an outlet for a variety of other artists, including: David Hockney, Andy Warhol, Bruce Weber, John Waters and others, most recently AMG Brasil and other productions. 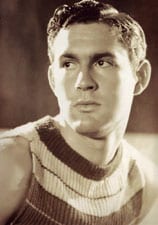 Robert Henry Mizer (1922 1992), known as Bob Mizer – was an American photographer and filmmaker who was known for pushing societal boundaries in his work. Bob Mizer’s earliest photographs appeared in 1942, in both color and black and white, but his career was catapulted into infamy in 1947 when he was convicted of the unlawful distribution of obscene material through the US mail. The material in question was a series of black and white photographs, taken by Mizer, of young bodybuilders wearing what were known as posing straps a precursor to the G-string. In spite of societal expectations and pressure from law enforcement, Mizer would go on to build a veritable empire on his beefcake photographs and films. Mizer established the Athletic Model Guild (AMG) in 1945 and published Physique Pictorial magazine to promote his work. With assistance from his mother, Delia, and his brother, Joe, he would go on to photograph thousands of men, building a collection that includes nearly one million different images and thousands of films and videotapes. Examples of his work are now held by esteemed educational and cultural institutions the world over, and can be found in various books, galleries, and private art collections. http://www.bobmizerfoundation.org