X is your window into the whimsical world of two best friends and two puppets searching for an escape from reality. Stop motion animation, puppetry and live performance meld in this fast-paced one-man show, a tongue-in-cheek exploration of quick fixes and fixations hard to quit. Australian theatre-maker Sunny Drake returns for the North American premiere of his critically acclaimed new show. 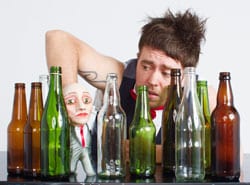 35 years in the making, human critter Sunny Drake is a complex piece of art. He lives his creative escapades, is usually in the middle of an art in life experiment, and airs his embarrassing and tender internal world on stage. Sunny is largely self taught with much inspiration from many amazing artists in finding his own style of multi-genre theatre, which he has been evolving since he was a teenage girl.  Sunny has performed in theatres, festivals, living-rooms, streets, work places, deserts, schools, universities, basements, backyards & conferences in Australia, the USA and Canada. He was an artist in residence at the Garage theatre in San Francisco in 2008 and has performed in the San Francisco International Arts Festival (10), NACL Festival (10), USA National Queer Arts Festival (08&10), the San Francisco Fringe Festival (08), New Mardi Gras (Sydney 09&10), Midsumma (Melbourne 09&10), Metro Arts (Brisbane 09, 12), the Brisbane Festivals UNDER THE RADAR (09) and Feast (Adelaide 09&10). Sunny was born and grown on Indigenous Jaggera-Turrabul land (Brisbane, Australia) and comes from English and Irish ancestry.