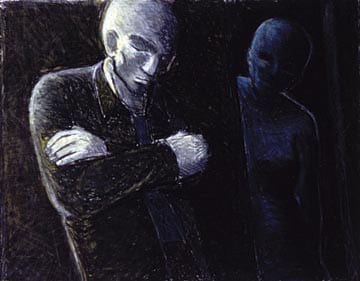 My introduction to the world of art was at my grandfather’s workbench, where he shared with me his knowledge of fine carving, and how to use all manner of tools. By the age of 10, I knew how to operate most power tools in a wood shop, and how to put a razor edge on a chisel. This early experience has given me great freedom in my work. A solid foundation in traditional craftsmanship, materials and discipline leads my focus on content, intent and balance. Over the years, an ever growing arsenal of techniques and seemingly unrelated technologies have allowed me to create works rich in both formal approach and meaningful subject matter.
As my understanding of content unfolded, a great desire to integrate my divergent approaches developed. A deep need to alter my physical environment to suit my emotional reality became a driving force in my existence. The cycles of work that have resulted from this have manifested as installations made for performances, performances made for installations, musical scores made from narrative illustration, improvisational music sessions on the internet, and cycles of work that encompass sculpture, stained glass, and painting as integrated installation. My work in one discipline seeps into the others, enriching each in a way that strengthens across boundaries, and redefines the reasons for the work to exist.

Twin forces in my personal life have driven me deep into the exploration of gender and technology. Because of my ability with technology of almost any kind, I found myself in demand in the burgeoning world of dot com startups in San Francisco. Struck by the artificially short life span of the very expensive black boxes that comprise the force that is the Internet, I started building sculptures out of the remnants of these machines. These constructions celebrate the quasi-spiritual reverence and mysticism that surrounds computers and Internet technology; items destined to become relics long before their useful life is ended. At the same time, another cycle of work started, realized in glass, wood and paint on panel, that delves into a dystopian experience of gender, male sexuality and identity that takes Pinnochio, Coyote, Joan of Arc and a World War I corporal as the avatars of deliverance.

I exist in a world that finds no contradiction between Louis Armstrong, The Dead Kennedys and Laurie Anderson; sees no difference between a work by Holly Hughes and the Simpsons; that celebrates Frank Miller on equal footing with Joseph Cornell. This world manifests in an insistent DIY methodology, that embraces the past, and looks constantly towards building a future; not hopeless, but knowing that participation is mandatory. This world takes artists as the primary force, makes possibilities that did not exist before, and meets at the crossroads.