TAKING IT TO THE STREET
Sketches, Poems and Monologues with the brOTHERs 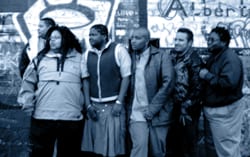 brOTHERs is a year old theatrical performance and spoken word collective of artists of color from a variety of cultures, races, classes and creeds, who fall somewhere on the spectrum from masculine female to transman. With a mission of Opening The Heart and Erasing Restrictive Stereotypes surrounding gender identity, race and sexuality, their work challenges the many misconceptions about who they are as women born/male identified people of color, living in a binary, often hostile and heterosexist world. They collaborate on different issues specific to their lives to give voice to the unimagined and unconventional. brOTHERs is a recipient of a Qcc Creating Queer Community grant.

La Tricia Ransom is a 38 year-old butch dyke who is her mother’s only daughter and sometimes the son she never had. She is a performance virgin, and without the love and support of her partner Tamra Winchester or the encouragement of her brOTHERs, would still be sitting in the audience saying, “I wish I had the nerve to do that.”

Yoseñio V. Lewis is a dark skinned Latino female to male transsexual who has been an activist since 1973. Maintaining his commitment towards social justice, he has directed his passion and energies to securing rights for a variety of “marginalized” groups. A health educator, speaker, writer, trainer, organizational management consultant, facilitator and spiritual hugger; Yoseñio is on the board of directors for the National Gay and Lesbian Task Force (NGLTF) and was also appointed to the initial San Francisco Transgender Civil Rights Implementation Task Force. He is a member of the Board of Directors of the Tenderloin AIDS Resource Center, a founding member of All Our Families Coalition and immediate past Chair of the National Transgender Advocacy Coalition (NTAC). Yoseñio also does spoken word performance with QueLACo, the Queer Latino Artists Coalition. Yoseñio has been a subject of several documentaries, including Christopher Lee’s Trapping of Transhood and the television channel A&E’s Transgender Revolution.

E. is a strong butch expressing his/her self on many levels of the artistic spectrum. S/he writes, composes and creates to challenge, expand and open our understanding of ourselves and others. S/he invites you into his/her world so as you can be empowered to walk in your own.

Angelo is a 42 year old other, from the streets of St. Louis, MO who appreciates all aspects of being. Angelo says “I observe life as it flashes before me, ever changing me… it feels good to share what goes on inside of me. My quest in life is to go deeper each time that I breathe. Writing is the way that I touch God and God touches me back. Three of my most favorite things are life, love and lust. Life because it is through the inhale and exhale of living that I reach for something better, Love because it is with the reaching inside myself that I find something better, and lust because it is in the breath of another in sync with mine that I explore the possibilities of what better must look like from the inside.”

Prado Gomez is a proud Mestizo Chicano/Apache/Hopi son of San Francisco. He was introduced to the magic of theater in high school. Since then he has spent 7 years writing/acting/directing with DramaDIVAS and a few years backstage at a few Bay Area theaters. You can see his face (and other parts of him) in the recently released short Unhung Heroes and hear his voice as a member of the Transcendence Gospel Choir.

Johnnie Pratt is an old enough to know better African-American female-bodied transgender performance artist who grew-up all over the continental U.S. and the Far East as a Third Culture Kid (better translated as military brat). His desire to belong and perform prompted him to actualize a vision and create the transgender people of color performance collective called brOTHERs (better known as “Other Brothers”). brOTHERs provides an avenue to live out his exhibitionism while reaching out to Trans folks of color with truth, much love, and respect with regard to the struggles of our daily lives. His life quest is to create a safe space for folks to actualize who they really are on all levels of their being with as much playfulness as possible. As far as living the reality of his gender identity, it takes its form in faggot sensibilities with woman loving tendencies.