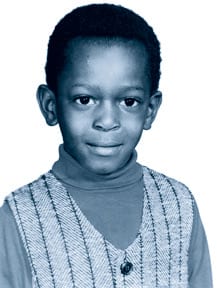 Cultural Odyssey in association with the National Performance Network and the NQAF present:
FAGGOT, a one-man multi-character performance, is the story of Michael, a boy who, daunted by his mother, Rita, run the gamut of attempted suicide, rape, alcoholism, homelessness and prostitution. From a homoerotic rite of passage into manhood, through spiritual warfare, to self-salvation, Michael inevitably learns what it means and costs to be both black and gay.

Lynwoodt Benard’s credits range from acting in the independent film, The Fan, through voiceover work with Ballethnic Dance Company to playwright and actor in the National Black Theatre Festival, 2001 in Winston-Salem, NC. A graduate to the School of Actor’s Express Theatre Company in Atlanta, Benard trained an intensive 18 months to instruct the “Sanford Meisner” technique. Benard has written and directed three stage plays including, At the Crossroads (1993), and Blackberries (1994). Currently, Benard is the Assistant Company Manager at Alliance Theatre Company, and the “Sanford Meisner” instructor at Actor’s Express Theatre Company.

The Meisner Technique is a powerful and dynamic approach to actor training that focuses on releasing an individual’s inner emotional life, while creating a high degree of spontaneity in performance. A series of improvisations train the actor to work moment-to-moment off the behavior of the other actors, while imagination exercises develop the ability to bring oneself to life emotionally, and how to sustain that life. The class is both fun and liberating for the novice, as well as, the seasoned professional.

Faggot is one of a series of programs designed by the National performance Network (NPN). NPN is an independent organization begun by Dance Theater Workshop and is comprised of arts organizations in 40 cities and 25 states, including Cultural Odyssey. NPN is made possible through major funding from the Doris Duke Charitable Foundation and the National Endowment for the Arts (a federal agency). For further information, visit the NPN Web site at www.npnweb.org or write National Performance Network, PO Box 70435, New Orleans, LA 70172.