“Frolic: Rainbow Circle”, is a dance concert which commemorates the 500 year history of the Two-Spirit/Queer Indigenous peoples’ presence. It’s a remembrance, an honoring, and a renewal through dance. Created by the Cuauhtemoc Peranda Mitote Dance Company, a male-Aztec Warrior, and a lady-Samoan Warrior have created an HONOR DANCE, which gives thanks to the existences and fight of the queer, two-spirit Native peoples of the past and the future. This four-part duet dances through movement a Creation Story, a War Dance, a blessing through Smoke and Ash, and a Flower and Rebirth dance. This dance presents the indigenous Aztec calendar’s shift from Ometeotl (Divine Duality, 5th Sun) to new sun Xochipilli (Flower, Integrated dual-gender, peace, 6th Sun). It is a necessary dance, a Milestone of the Aztec Peoples, and the National Queer Arts Festival. Dancing through space and time, four feet bless the stage in a contemporary duet, a Frolic.

This dance is made possible by a grant through the Queer Cultural Center of San Francisco. 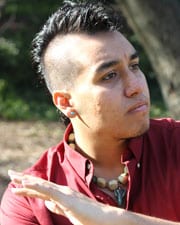 Cuauhtémoc Peranda (Xicano/Aztec and Mescalero Apache) is a choreographer, dancer and scholar from Santa Cruz, CA. His dance training primarily comes from Tezcatlipoca under David Vargas, Tlaloc-Chalchihuitlicue by Elizabeth and Elena Barron, as well as Stanford University and Mills College. His work has been presented around the Bay Area, and he has traveled through the United States, and to Canada and Mexico as a performer. Since the age of 15, Cuauhtémoc has taught traditional Aztec dance to his communities and now continues to teach Aztec dance and give lessons in voguing, modern dance, and winterguard and drum major mace work. He has studied with, and performed in contemporary works, by Ralph Lemon, Rulan Tangen, Ann Carlson, Jane Comfort, Robert Moses, Diane Frank, Aleta Hayes, Parijat Desai, Susie Cashion, Tony Kramer, Sonya Delwaide, Molissa Fenley, Sheldon Smith, and Shnichi Iova-Koga. He has graduated with honors from Stanford University with degrees in Comparative Studies in Race and Ethnicity and Dance, and was the 2010 recipient of the Sherifa Omade Edoga Prize for Work Addressing Social Issues. Cuauhtémoc current artistic interest is the examination of Modern Dance’s relationship to the “Native American Indian”, and he is working to create a dance form named: MITOTE—a dance form with the mission to fuse the sacred indigenous tradition of dance and the experimental nature of Modern/Avant-Garde dance. In short, Mitote is the dance of sacred, un-oppressed sharing: the House of light. He is the Artistic Director of his company: Cuauhtémoc Peranda Mitote dance company, and is the Director of Choreography for the Santa Cruz Chamber Ballet. 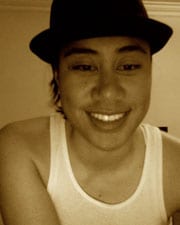 Vai Fuatino Alefosio (Samoan/American/Queer) likes to shake what her mama gave her! Art expression, in its many forms is equivalent to power. She continues to maintain that belief through dance expression along with the philosophies behind it. Vai is a strong advocate for youth development through the framework of art expression. She is currently attending SFSU and CCSF as a Dance major, but also receives a valid street education outside of academia as well. She has danced with various companies; Under the Radar, an all female hip hop collective, Village Dancers with SFSU, Hip Hop Performing Arts at CCSF, and One Love Oceania which is a Pacific Islander Queer Womyn’s Collective utilizing art expression to address social issues that impact our community and creates a healthy dialogue within our P.I. communities and beyond Oceania. She has also assisted her talented students in putting on Middle and High School dance productions. Art expression is power and you’ll find her at her best when she gets to combine her love of dance within a youth development context. 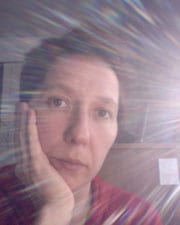 Gretchen Jude is a composer, performer and third-generation Idahoan living in Oakland. During an eight-year tenure in Tokyo as an English professor, Gretchen studied traditional Japanese music and became interested in the cross-cultural and sociopolitical aspects of sound. In 2011, Gretchen completed an MFA in Electronic Music/Recording Media at Mills College. Her work is concerned with exploring the liminal spaces between self and other, human and machine, tradition and innovation. 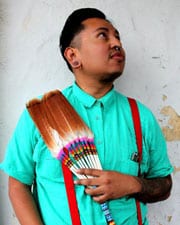 Nube f. Cruz (Yaqui/Mixteco/XIcan@)is an independent mixed media artist, organizer, punk rocker and brother by the way of East L.A and Santa Ana CA. His work is a fuse between social justice, indigenous, queer, and urban motifs. He has showcased an all queer urban indigenous photodocumentation project at Galeria De La Raza 2011, was one of the cofounders of Voz De Lucha a grassroots queer punk/alternative group showcasing people of color musicians, has started his own buisness, has done several murals across the bay area, and is currently back home in Los Angeles organizing a queer people of color artist project that will premiere by Nov. 2012.

Israel / Palestine: An Act of Seeing