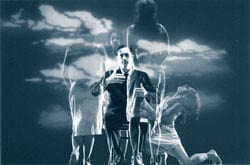 The world premiere of Grace, the second section of a multi-year trilogy, highlights the 2004 home season of Joe Goode Performance Group at San Francisco’s Yerba Buena Center, June 3-13. Sharing the bill will be the reprise of Mr. Goode’s Folk, part one of the trilogy that had its premiere in 2003. Performances will be given Thursday, June 3 through Sunday, June 6 and Thursday, June 10 through Sunday, June 13 at the Yerba Buena Center for the Performing Arts (700 Howard Street at Third) in San Francisco. All performances begin at 8 p.m.

Where Folk focused on individual characters whose everyday personalities and circumstances make them remarkable, Grace zeroes in on particular moments in time and events that reveal the extraordinary in the seemingly ordinary. According to Goode, the new work will not be as linear or narrative as is Folk, and he will choose instead to allow the characters’ stories and circumstances to be told through epiphanies in movement and sound.

Goode will collaborate with composer Mikel Rouse, who will also appear as a performer in Grace. Rouse has been described as a fearlessly pioneering personality who stretches the limits between music, visual image and text. He was a rocker in New York in the late 1970s and has emerged as one of the premiere young composers to fuse rock and classical conventions. He often uses complex, almost geometric patterns of rhythm, building up simple layers into towering structures of intricacy and fascination. No stranger to stage work, Rouse is best known for his operas, including Failing Kansas, based on Truman Capote’s In Cold Blood, and the first “talk-show opera”, Dennis Cleveland.

Folk features the six versatile members of Joe Goode’s ensemble working in his unique style of text-based dance theater, that features an unusual amount of singing. Metaphorically picking up where his 2002 Mythic, Montana left off, Folk is set in the prototypical American West, where a variety of people–landowners, yuppies, the poor, dreamers, ranchers, cowboys and new-agers–coexist in a particular cultural mix set against the expansive, rural Western topography. The story centers on a waitress who longs for big-city excitement and sensuality and aspires to be a singer and the enigmatic and quirky Snakeboy. Music is composed by Beth Custer.

In 1979 Joe Goode began synthesizing a genre of dance theater that combined text, gestures, and humor with his own deeply physical, high velocity dancing. In 1986 Joe Goode Performance Group (JGPG) incorporated as a non-profit organization. JGPG has performed annually in the San Francisco Bay Area since its founding and has toured extensively throughout the U.S. and appeared in Canada, Europe, and South America.

As well as its stage repertory, Joe Goode Performance Group is known for its performance installations and video collaborations. Since 1989 the company has had major installation works commissioned by the M.H. de Young Memorial Museum and the Capp Street Project, both in San Francisco, and has collaborated with Bay Area film makers on a variety of projects, one of which, Goode’s signature work 29 Effeminate Gestures, was produced by PBS and aired nationally on “Alive From Off Center.” Goode has recently been honored with a New York Dance and Performance Award, a “Bessie,” for the 1998 creation and choreography of Deeply There (stories of a neighborhood). Also in 1998, Joe Goode was awarded one of the first Irvine Fellowships in Dance, and in 1995 was one of only ten U.S. choreographers to receive a prestigious National Dance Residency Program grant for artistic development.

FOLLOW US!
QUEER PHOTO SALON The 13 Hallucinations
Scroll to top